Advertisement
Home / West-bengal / Lepcha dharna on board ‘transfer’ in Kalimpong

Lepcha dharna on board ‘transfer’ in Kalimpong

The protesters are demanding that the Mayel Lyang Lepcha Development Board, which is currently under the aegis of the state government, be not transferred to the Gorkhaland Territorial Administration 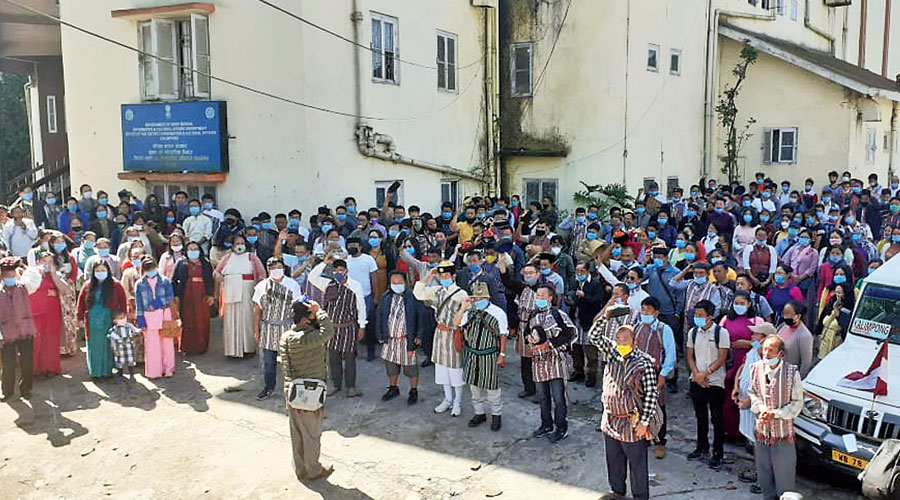 Members of the Lepcha community started a dharna in Kalimpong on Tuesday, demanding that the Mayel Lyang Lepcha Development Board, which is currently under the aegis of the state government, be not transferred to the Gorkhaland Territorial Administration.

During an administrative review meeting in Siliguri a few weeks ago, the chief minister had said a monitoring committee would be formed under the GTA to supervise the activities of 16 development boards the state government had formed for different communities.

Members of the development boards interpret the monitoring committee as the transfer of the boards to the GTA.

Eman Lepcha, coordinator of thoom sezoons of the Indigenous Lepcha Tribal Association (ILTA), said: “We want to request the state government not to bring the development board under the GTA.”

Eman, however, added that while those participating in the dharna were members of the ILTA, the agitation was being organised by common Lepchas.

The ILTA functions on a three-tier system. The lowest unit is called kqoung sezoon and is similar to a gram panchayat, followed by thoom sezoon (block level) and poom sezoon (central committee).

There are 31 thoom sezoons in Bengal and Eman said “representatives” of all the thooms were present at the dharna being held in front of Kalimpong Town Hall. “The dharna will continue through the night,” said Eman.

He added that the demonstrators also wanted different Lepcha leaders to come together on a common platform and work for the community. Of late, there have been allegations and counter-allegations against Lepcha leaders over various issues related to the functioning of the development board.

At a time when Mamata is facing the Herculean task of balancing the Bimal Gurung and Binay Tamang factions of the Morcha, the agitation by the Lepcha community could pose fresh challenges for the chief minister.

The issue raised by the Lepcha committee resonates across not only members of other 15 development boards but also a section of Trinamul Congress leaders in the Darjeeling hills.

The GTA is currently headed by Anit Thapa, leader of the Tamang faction.

“We had not much to offer in the hills, apart from Mirik where the civic body is with us. If we lose our grip on the development boards, our party will be further weakened,” said a Trinamul hill leader.

Another hill Trinamul leader, however, tried to assuage the fears among the Lepchas and said the development board would only be “monitored” by the committee and all other decisions would be taken by the board.

Development boards provide a sum of Rs 2 lakh each to construct houses, build pathways and execute drinking water schemes among others.

The Lepcha board was the first to be formed in 2013 and it was largely seen as an attempt to counter Bimal Gurung who was then heading the GTA but had frosty relations with Mamata. Over the years, there have been allegations of irregularities in the execution of housing schemes by some boards.

Observers believe the development boards have not been able to bring the desired political benefits to Trinamul.

“These factors might have prompted Mamata Banerjee to announce the monitoring committee,” said an observer.

Lyansang Tamsang, the chairman of the Lepcha development board, did not respond to calls from this newspaper.