Bengal has returned from the just-concluded Junior National Karate Championship 2017 with eight golds. The tournament, organised by Karate Association of India (KAI), was held at Talkatora Indoor Stadium in New Delhi from May 11 to 13. And of the eight gold medallists, half are products of Premjit Sen’s BD Block training academy. 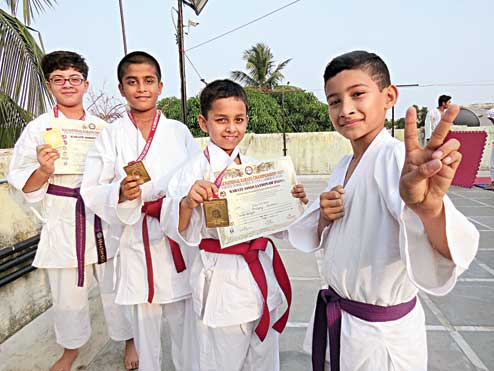 Bengal has returned from the just-concluded Junior National Karate Championship 2017 with eight golds. The tournament, organised by Karate Association of India (KAI), was held at Talkatora Indoor Stadium in New Delhi from May 11 to 13. And of the eight gold medallists, half are products of Premjit Sen’s BD Block training academy.

Another gold might have got added to the tally if Aritri Dey did not commit an elementary mistake. “She forgot to bow at the start of the bout. That got her disqualified,” laments Sen, who was also the competition manager at the tournament. Since Aritri has got a bronze medal at the Senior National Championship, expectations were high from her.

Return to practice pad
The gold medallists, not even in their teens yet, were back for practice within 10 days on the rooftop of BD 340.

Bespectacled Rishika Patra takes off her glasses before a fight. The CJ Block girl has been training at the academy since the age of three. Now she is 11. “My father used to be Shihan (Japanese term for master instructor)’s student. He had to give up karate due to spondylitis,” says the girl, whose cherubic face belies the grit of a purple stripe belt. That’s three grades below a black belt.

She studies in Ashok Hall Girls’ Higher Secondary School. The little time she can devote to studies at home after daily practice so far has fetched satisfactory grades. “Though official karate classes are twice a week, Shihan makes them practise separately every day after school,” says Rishika’s mother Sanjukta.

The results have been there to show. Her three earlier national championship appearances have fetched a gold, a bronze and a silver. Add to that a bronze in the Commmonwealth Karate Championship in 2015. “But I prize that first national gold beyond all other achievements. It was my first major competition. Shihan fell ill and had to leave before my fight. So I was alone,” says the girl who idolises boxing legend Mary Kom.

This time, Rishika travelled to Delhi with her parents, fellow student Pratyay Sarkar and his mother. “I was tense about how I would do. Didi (Rishika) was sure to get a medal,” says Pratyay, an eight-year-old from AD Block.

He need not have worried. “Pratyay has never returned without a gold medal from any competition,” says mother Chhanda. This may have been his first national event, but the boy has already played and won in internationals championships. “We try hard to save and send him abroad. Last year, he went to Cape Town, South Africa and the year before to Sydney, Australia. He won in both in his category,” says Chhanda, who runs a tailoring outfit supplying school uniforms to the state government.

This time was no different. “I won all five rounds. Ma was more excited than me,” Pratyay grins. The win earned him a big box of chocolates.

Such is the support he gets from home that his school was changed within a year of joining. “The pressure of studies was too much in Garden High,” she says. Pratyay now studies in Apeejay School in the neighbourhood.

Such is the pull of Sen’s coaching that people travel considerable distances. The other two gold medallists — Ayushman Ray and Amiyo Sundar Biswas — come from Madhyamgram and Konnagar respectively. “I used to train locally before. I am coming to Shihan’s academy for one year now,” smiles Ayushman, 9. Amiyo may be just 12 but he is already a three-time national gold medallist.

Karate’s inclusion in the 2020 Olympic Games in Tokyo has added a spring to their steps. “We used to be a sidelined sport. Now we will be taken seriously. I hope our state government takes notice of these young champions like our neighbouring states have,” says Sen. “My focus is on five students. From the age of 14, they will be eligible to complete in Asian Karate Championship. I am training them to face competition from the traditional powerhouses — Japan, Iran and Malaysia.”

Can an Asiad/ Olympic karate medal come from the Salt Lake academies?
Write to The Telegraph Salt Lake, 6 Prafulla Sarkar Street, Calcutta 700001 or email to saltlake@abpmail.com