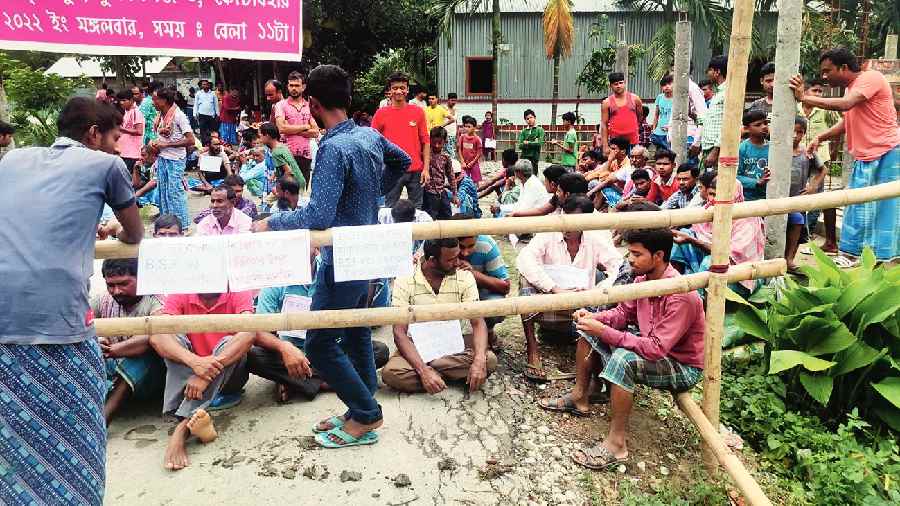 Residents of a village in Cooch Behar close to the India-Bangladesh border blocked a road in front of the local camp of the Border Security Force (BSF) on Tuesday, demanding that they be allowed to grow corn and jute on their land beyond the fences.

The blockade continued for four hours and was lifted after officials of the paramilitary force and local block administration assured the protesters that the issue would be discussed.

Around 11am, villagers of Ghonapara-Krishnapur, some 45km from district headquarters, blocked the road that leads to the BSF camp of their area with bamboo poles and squatted with placards.

At the India-Bangla border, cultivation of any crop that grows taller than 3 feet on any plot beyond the fences —between the fences and the zero line — is restricted by the Union home ministry. “This is because tall plants cut down border visibility,” said a source.

Hazrat Ali, a farmer of the village who had farmland beyond the fences, and was at the protest on Tuesday, pointed out practical problems. “The BSF is not allowing us to cultivate jute and corn in our plots beyond the fences. They insist we grow other crops and vegetables. But if we cultivate other crops, some Bangladeshis steal them or their cattle grazes on them. As a result, we can’t earn anything.”

“If we can cultivate corn and jute, we don’t have to face these problems” he said, explaining that cows and goats don’t chew on these crops and thieves don’t have much use for jute and corn as both need to undergo processing after harvest.

Around 100 farmers of the village have farmland beyond barbed fences. A farmer said if the BSF did not allow them to cultivate jute or corn, they should pay a compensation of Rs 30,000 per bigha.

Rishi Banerjee, the BDO of Tufanganj-I block reached the spot and spoke with villagers in the presence of BSF officials. Finally, the blockade lifted around 3pm. “We will hold talks with the BSF on their demands,” the BDO said.

Earlier, similar protests had cropped up in some other bordering areas of Cooch Behar district. Villagers had then alleged that the BSF prevented them from cultivating jute even on plots located within the fences.

The allegations had made the administration intervene and the issue was sorted out.

The Banglar Manabadhikar Suraksha Mancha (Masum), a rights group, has stood by farmers. “BSF is creating problems for farmers of bordering villages and local population by imposing curbs on flimsy pretexts. This is unacceptable,” said Kiriti Roy, its secretary