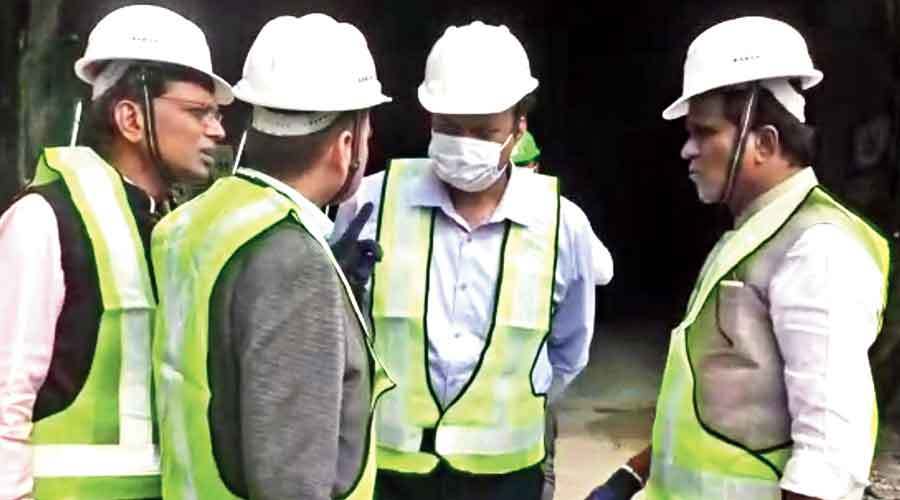 Raosaheb Patil Danve, the Union minister of state for railways, on Monday visited the site of the Sevoke-Rangpo rail route that will connect Rangpo, the bordering town of Sikkim, from Sevoke station in Darjeeling district, some 20km from here.

He inspected two tunnels and a bridge along the route and asserted that the project would be ready by 2023.

“Work on the project is going on in full swing. Our plan is to open the route by 2023 and we hope the rail route will be ready by then. It will largely help in boosting the economy of Sikkim and will also create a new mode of communication for residents of the state,” said Danve after his visit.

The ambitious project to connect the Himalayan state of Sikkim that sits on the India-China border has emerged as a priority project for the railways, considering the recent activities of China in Arunachal Pradesh and in the Chumbi Valley area that is near Bengal and Bhutan.

Earlier this month, the general manager of Northeast Frontier Railway (NFR) had visited the project site. He had also visited Sikkim and had met P.S. Tamang (Golay), the Sikkim chief minister, to discuss the project.

The project was launched in 2009 when Mamata Banerjee was the Union railways minister.

The 44.96km rail route has 14 tunnels and 13 bridges. Out of the total stretch, around 40km are within Bengal and the rest within Sikkim.

“Once this project is complete, necessary steps would be taken to connect Rangpo with Gangtok, the capital of Sikkim,” said an NFR source.

Railway officials said the total length of tunnels along the route was 38.686km. Of this, tunnels have been built over 11.7km and every month, around 1km of tunnel is being built. The total investment for the project is around Rs 8,000 crores, an official said.

They recalled the Doklam standoff of 2017 between Indian and Chinese troops and underscored the need for a rail network to help ferry defence equipment to the borders.

“The rail route is of optimum importance, given the recent activities of China. Also, a number of stretches of NH10 (the principal highway to Sikkim) are landslide-prone and the road regularly gets blocked, especially during monsoon months. In such a situation, a parallel transport network to connect Sikkim is vital,” said a former officer of the Indian Army.