Jumbos on town visit safely steered out after midnight

On Sunday, as the evening rolled on, foresters burst sound crackers to make the elephants move out of the graveyard where they had halted since afternoon 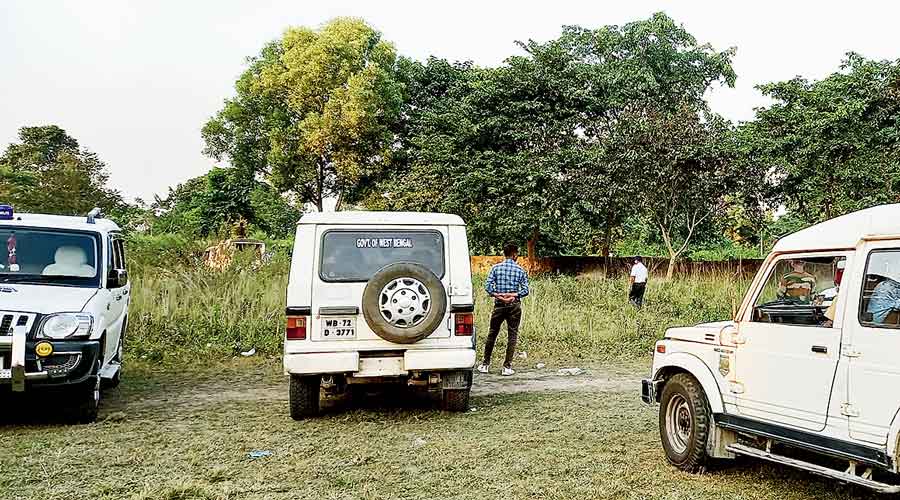 Foresters monitor the activities of the two elephants at a graveyard in Jalpaiguri town on Sunday.
Photo: Biplab Basak
Our Correspondent   |   Jalpaiguri   |   Published 16.11.21, 03:07 AM

The two elephants which had entered Jalpaiguri town early on Sunday before daybreak finally walked out of the town after midnight and headed for Gourikon, a forest patch under the Baikunthapur forest division.

It took several hours for  foresters to steer the animals into the forest, but the unhurried pace of the exercise worked. The elephants, while retreating to the forest, did not get ruffled or cause any damage to the town.

Sources said that on Sunday, as the evening rolled on, foresters burst sound crackers to make the elephants move out of the graveyard where they had halted since afternoon.
Around 8pm on Sunday, when the elephants made some move, prompting foresters and  state police to halt traffic movement on NH27 that skirts the town.

“It was a challenge for us to make the elephants move and cross the highway. Usually, elephants stop moving along the highway if they see lights of moving vehicles. That is why traffic was stopped for an hour,” said a forest officer.

The elephants, he said, started moving but again halted on the way. Traffic was restored after an hour to avert snarls.

Around 11pm, the foresters made a second attempt at steering the elephants.

“Again, movement of vehicles was stopped and we started steering elephants towards the highway, using searchlights and sound crackers. The elephants climbed up to the highway and again descended back. Finally, around midnight, both the animals crossed the four-lane road,” the official added.

The elephants walked past the Jalpaiguri Government Engineering College and then entered the plantations of Danguajhar tea estate, much to the relief of the foresters and the police.
The foresters started bursting crackers again, steering the elephants towards Dangapara, an adjoining locality. The elephants then moved into the Karala Valley tea estate and entered Malipara,  on the way to Gourikon forest.

“I had no inkling that the elephants had moved through our locality at night. It was only in the morning that we came to know about it and saw their footprints,” Dhir Mohan Malakar, a resident of Malipara, said.
The elephants moved through Rangdhamali and reached Gourikon, from where the forests of Baikunthapur forest division starts.

“Throughout the day today (monday), the elephants are there in Gourikon. We have plans to drive them another 5km or 6km to the core areas of Baikunthapur so that they do not return to Jalpaguri town. The drive will start in the evening,” said Hari Krishnan,  divisional forest officer of Baikunthapur.

The sudden visit of two elephants to Jalpaiguri town, which is around 20km from the forest, has been termed as an “adventure” by elephant experts.
Parbati Barua, a prominent elephant expert, said the duo were “maljuria” or a pair of male elephants who stay away from the herd.

“Maljuria elephants do foray into unknown areas. Also, fragmentation of elephant corridors is yet another issue,” Barua said over phone from Assam.