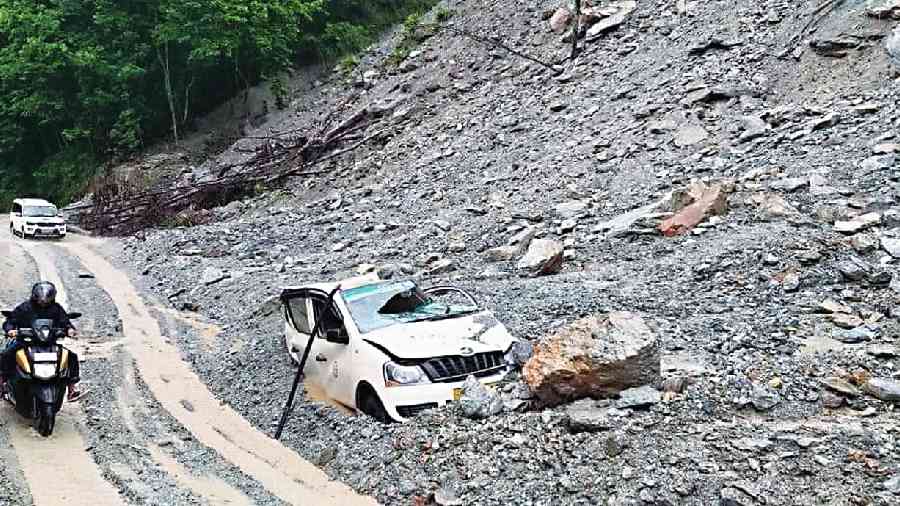 Repeated spells of heavy rain battered Darjeeling district and the neighbouring Sikkim in the past 48 hours, triggering landslides that disrupted the mountain railway service and snapped the sole highway to the Himalayan state and inundating a number of localities in and around Siliguri.

“The monsoon trough is vigorous over the sub-Himalayan Bengal and Sikkim and caused the enhanced rainfall activity in the past two days. Such rainfall is likely to continue until September 5 and there is a chance that it will rain even 200mm at some places,” said an official of the India Meteorological Department.

The IMD has already issued alerts for the sub-Himalayan districts, especially Kalimpong, Jalpaiguri and Alipurduar, for the next 48 hours.

Siliguri received 170mm rain in 24 hours till 8.30am on Thursday. A number of other areas recorded rainfall of over 100mm.

Weather experts have said the monsoon trough extends from Rajasthan to the northern Bay of Bengal every year.

“However, at times, it shifts northwards or southwards. If the southward movement happens, central India gets more rainfall. But this time, it has shifted northwards and is hovering over the entire stretch from Patna to Nagaland while touching the foothills. That is why the sub-Himalayan Bengal and Sikkim are experiencing such intense rainfall,” G.N. Raha, a weather expert at the IMD office in Gangtok, said.

A landslide occurred on Thursday at 29th Mile in Kalimpong district along NH10, the principal highway that connects Sikkim and Kalimpong with the rest of the country. Traffic was disrupted for several hours and vehicles were allowed to move on a single flank after the debris was cleared.

Several landslides hit Sikkim also. A landslide occurred along NH10 at 20th Mile between Singtam and Rangpo. Roads connecting Jorethang with Namchi and Manpur were blocked because of the landslides. Works were on to remove the rubble from the roads.

Namchi in Sikkim on Thursday following a landslide

“A flash flood occurred at 10th Mile and also a number of fair weather roads were blocked in several subdivisions of the Himalayan state today (Thursday),” said a source. In Namchi, three buildings were damaged as debris fell on the structures following minor landslides. No casualty has been reported.

The Indian army on Wednesday rescued 78 tourists who were stranded near the Yumthang Valley in north Sikkim because of a landslide.

Sources said eight women, two infants and 68 others had been rescued from the site that is 19km from Yumthang. They were travelling in eight vehicles when the road was blocked. The army personnel used wooden planks and ropes to help the tourists navigate the damaged stretch and shift to the nearest medical camp where they were provided with food and necessary aid. Later, they were transferred to different places.

Landslides were reported at Golaipakha in Ghayabari and at Lower Simiring and Narbung — all located in the Kurseong subdivision of Darjeeling district. A number of families were shifted to a relief camp at Lincoln Club in Sepoydhura of Kurseong.

The Darjeeling Himalayan Railway services were halted when two landslides occurred along the route at Tindharia and Rongtong (both in the Kurseong subdivision) on Thursday morning.

“We have stopped the regular train service between Darjeeling and New Jalpaiguri. Our engineers and other technical staff are working on the site to clear the tracks. The decision to resume the toy train service will be taken only after monitoring the weather tomorrow (Friday),” said a railway official.

Thousands of residents had to face inconvenience in Siliguri on Wednesday night and on Thursday morning because of water-logging at Ashok Nagar, Millanpally, Haiderpara, Hakimpara, Champasari, Pradhannagar and Ganganagar. The city’s prominent thoroughfare Bidhan Road went under knee-deep water.

The Mahananda river that flows through Siliguri swelled because of the heavy showers. The river flowed at a height of 113.6 metres on Thursday morning and submerged low lying areas on both the banks. Later in the day, water level in the river started receding.

A number of places in the Matigara block near Siliguri also faced water-logging on Thursday. “Eventually, the water has receded. However, we are on alert as there is a forecast of heavy rainfall in the next few days. A number of roads have been damaged because of the rain and water-logging. All five borough offices were asked to assess the loss and submit reports to us. We will send the reports to the state urban development and municipal affairs department seeking funds,” said Siliguri mayor Gautam Deb.

The weather experts said intense spells of downpour could lead to landslides in the hills and trigger flash floods in low lying areas in the coming days. “It can also damage crops and reduce visibility,’’ said a weather expert.