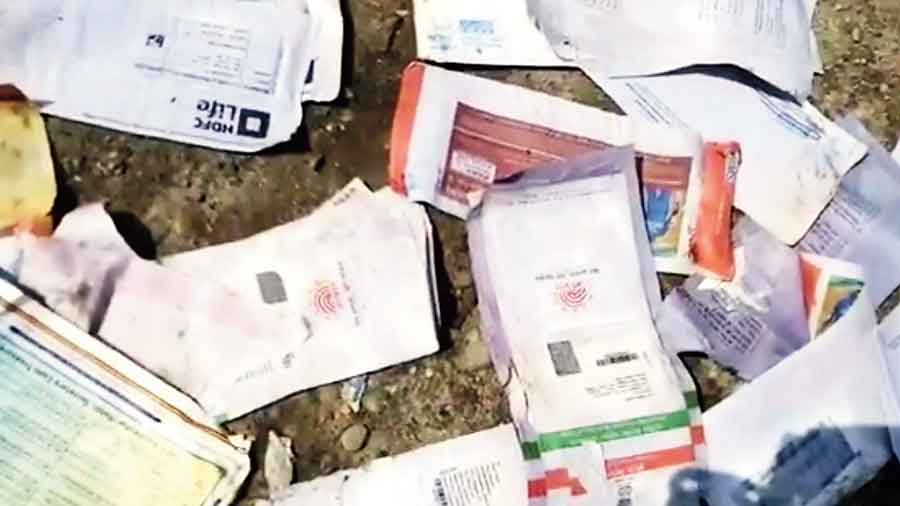 The Aadhaar cards and other documents found near Kankata More off Eastern Bypass in Siliguri on Tuesday.
Passang Yolmo
Our Correspondent   |   Siliguri   |   Published 04.08.21, 03:09 AM

Hundreds of Aadhaar cards were found dumped on a vacant land adjacent to Eastern Bypass in Siliguri on Tuesday.

Police said the Aadhaar cards, wrapped in white envelopes, were strewn on the plot near Kankata More and they were trying to find out whether the documents were real or fake.

“There were hundreds of those cards and also some other printed papers which appeared to be bank documents. It seems that someone had dumped these items in a hurry in the deserted area,” said a resident of Kankata More.

In the past few weeks, a number of people have been arrested in north Bengal for cheating people with fake Aadhaar cards.

“We are trying to find out whether the Aadhaar cards are real or fake. If it is found that the seized cards are genuine, we will speak with authorities of the postal department that delivers them to people on their doorsteps. It is a serious offence to dump original Aadhaar cards instead of delivering them to concerned persons,” said an officer of the Siliguri Metropolitan Police.