UP strong-arm tactics on Trinamul MPs 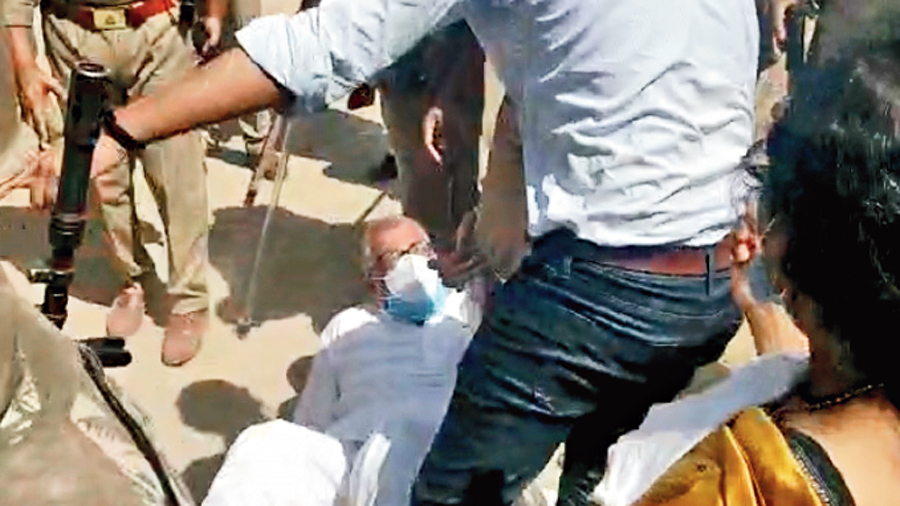 A delegation of Trinamul Congress MPs was pushed around and physically prevented from visiting the family of the Hathras gang-rape-and-murder victim on Friday in a near repeat of the manner in which Rahul Gandhi and Priyanka Gandhi Vadra had been stopped a day earlier.

The only difference was that the Trinamul delegation managed to get to the periphery of the victim’s village, primarily because they approached the district in separate small groups to avoid being noticed and stopped.

However, they were stopped by police from proceeding further on the outskirts of the village. Video footage released by Trinamul, as well as television cameras, showed the police and officials physically pushing the MPs back.

As the Jaynagar Lok Sabha member, Pratima Mondal, tried to evade the police and move ahead, she was physically stopped by a man in plainclothes and helmet. When O’Brien intervened, he was pushed back by the same man and the Rajya Sabha member fell. O’Brien was helped back onto his feet by the same man and both the MPs were then pushed behind a rope where a heated argument ensued.

Besides O’Brien and Mondal, the delegation included Barasat MP Kakoli Ghosh Dastidar and former MP Mamatabala Thakur. The delegation had travelled to Delhi from Calcutta separately without their security detail, Trinamul’s Rajya Sabha leader O’Brien told The Telegraph over phone while on his way back from Hathras.

The composition of the Trinamul delegation, said sources, was Mamata Banerjee’s message about the party’s inclusive brand of politics.

“While O’Brien represents a minority community, Mondal is from a Scheduled Caste and Thakur is Matua,” said a Trinamul insider.

According to sources in Trinamul, the Bengal chief minister is set to hold a rally in central Calcutta on Saturday in protest against the alleged rape and murder of a teen at Hathras and the assault on party leaders by the UP police.

“She (Mamata) herself is going to lead a march, from 4pm (on Saturday). It will begin near the planetarium and culminate at the Gandhi statue on Mayo Road. She believes the time has come to step it up,” said a Trinamul Rajya Sabha member.

After the Congress delegation, led by former president Rahul and general secretary Priyanka, was stopped over 100km from Hathras on Thursday, the Trinamul team decided to keep their visit quiet.

“We left Delhi in different cars and did not inform our drivers even till we were about 10km from our real destination. Even at the toll, we bought tickets for Agra. It was only when we were about 10km from Hathras that we decided to join up and proceed together in our cars. That’s how we managed to enter Hathras. But we were stopped about a kilometre from the victim’s house by the police, who were also not allowing the media to go anywhere near the family,” O’Brien said.

According to Mondal, who is a Dalit like the victim, the Trinamul leaders urged the police to permit at least two of the women members of the delegation to visit the family and offer condolences but the request fell on deaf ears.

The Trinamul team sat on a dharna outside the village for a couple of hours, after which they marched to the local police station to file a complaint demanding an FIR against cops for “manhandling a woman MP”.

While the MPs were protesting, they were joined by a dozen local workers of the Samajwadi Party.

Speaking to journalists, who too were up in arms over being prevented from doing their job, Mondal said she was pushed around by officials. “If they can behave like this with a woman MP, then you can imagine how the Yogi (Adityanath) government treats common people and women in this state.”

Later, O’Brien said in a statement: “All we wished today from the shameless UP administration was to allow two of our women MPs to meet and console the grieving family in Hathras. The two MPs were willing to walk the 1km to the family home. That also was disallowed. The world and India saw what happened. Pratima Mondal, our LS MP, herself an SC, was manhandled by a male member of Ajay Bisht’s jungle raj.”

Bisht is Adityanath’s real name and many of his political rivals prefer to address him by that.

Dum Dum MP Saugata Roy, a Trinamul national spokesperson, said it seemed the Yogi Adityanath government of Uttar Pradesh was trying to hide the truth. “That is why it has been going out of its way to stop the Opposition and even the media from reaching the family.”

Bengal BJP chief Dilip Ghosh said: “This drama, they (Trinamul) should stop immediately…. What is Bengal’s track record in dealing with crimes against women? The Yogi Adityanath government has been taking action.”