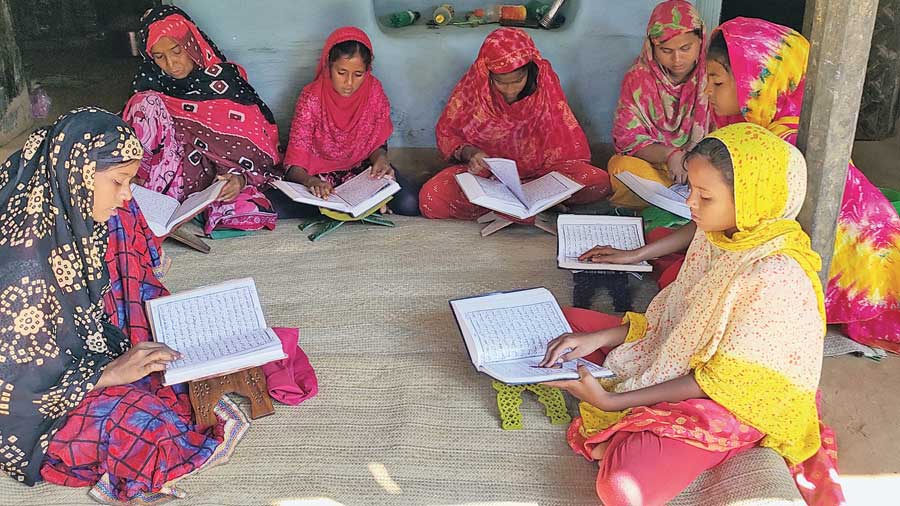 A year on, the sleepy hamlet of Bahalnagar off NH12 in Sagardighi wears a forlorn look. The place, where mainly Muslim families live, was home to five migrant labourers who were gunned down by militants in Kashmir’s Kulgam on October 29, 2019.

The attacks took place after the Narendra Modi government on August 5, 2019, revoked the special status granted to Jammu and Kashmir.

The labourers used to earn Rs 15,000 to Rs 17,000 each month in Kashmir. Breadwinners gone, survival is the main concern of the bereaved.

But their fates are not the same. A relative of Kamruddin said they spent all day (Thursday) in prayers. Kamruddin’s wife Roshanara Biwi is jobless, he added.

At the home of late Rafiq, who is survived by three married daughters, at the end of prayers there came a din of thanks for minister Suvendu Adhikari, who reportedly secured jobs in the transport and irrigation departments for all three daughters. Each now earns Rs 12,000 every month. At Mursalim’s home, wife Saira Biwi led the prayers. Saira works in the same role as Parvin, one of Rafiq’s daughters, with Kulgam attack survivor Zahiruddin Sarkar now back on his feet after months of treatment.

Sources, however, said that Kamruddin’s wife Roshanara and Rafiqul’s wife Maria Biwi had been “overlooked” for jobs as they had not completed schooling. Jangipur MP Khalilur Rahaman helps both the women with Rs 3,000 every month.

“Though these families have been paid large amounts by the government and NGOs, some of them are still jobless owing to their lack of qualifications,” said a source, pointing to an air of existing discontent.

“These two women are not middle school graduates and so have been overlooked. This should be rectified,” a source added.

Asked about the two women, Sagardighi BDO Subhajit Kundu pointed out that their lack of educational qualification was a roadblock to a job.

The tragedy that had struck the five Bahalnagar families in 2019 led to a steady stream of VIPs, including chief minister Mamata Banerjee, visiting the village soon after the incident. These days, however, no visitor comes to enquire about the families. But villagers are grateful that at least the roads built for VIPs are permanent.

Sources said a Rs 29 lakh tender for fortifying the concrete road leading into the village was currently underway and would be completed soon.