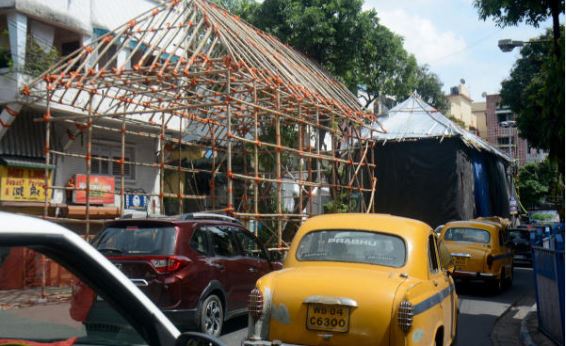 Calcutta traffic police are trying to collaborate with Google so that people who click on the “Google Map” application during Durga Puja will get to see which roads have been closed or turned one-way.

Every year, the police impose restrictions on at least 100 roads across the city on the Puja days, keeping in mind the footfall and vehicular load on roads near pandals big and small.

“If people have all information about road restrictions and diversions at their fingertips, that would save them a lot of harassment,” an officer in the traffic department said.

“Closed roads, one-way roads and diversions pose a big problem to Puja revellers. Sometimes, people have to take long detours just because they are not aware of the diversions. We are trying to address the problem.”

The Google Map app marks heavily congested roads in deep red and the ones that are less congested in red. All other roads are marked green.

“Once the collaboration between Calcutta police and Google is formalised, the app will also show one-way entries, diversion points and the roads that have been closed because of puja pandals,” said Santosh Pandey, deputy commissioner of police, traffic.

Calcutta police commissioner Anuj Sharma on Monday launched the Durga Puja guide of the traffic police, which is a compilation of all prominent Durga puja pandals and the traffic circulation plan in the respective areas.

Sources in the traffic department feel police as well as cops would benefit once the traffic restrictions start getting reflected in the Google Map app.

“We have already submitted the list of roads where we have imposed restrictions. We are awaiting Google’s response on the format in which they are expecting the data. Hopefully, it should be done in a day or two,” said a senior officer in the traffic department.