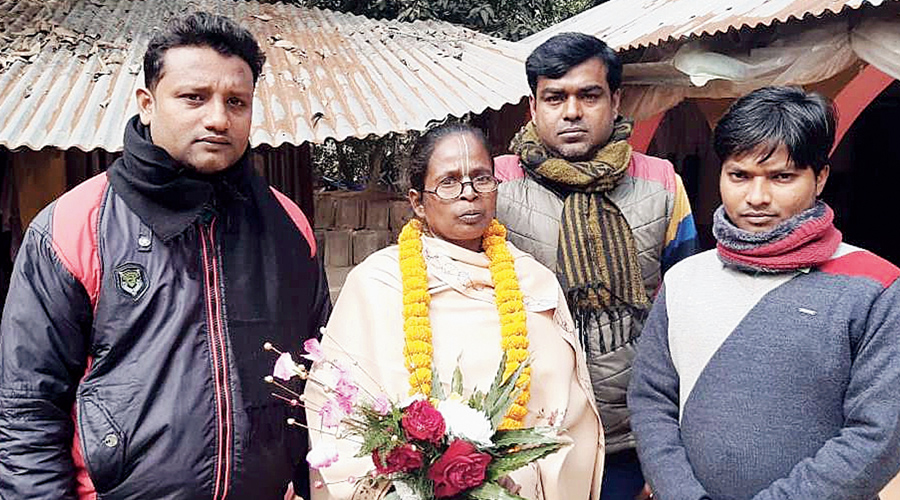 The Centre’s decision to confer Padma Shri, the fourth highest civilian award in India, on an activist of the Rashtriya Swayamsevak Sangh-backed All India Vanavasi Kalyan Ashram of Malda, has come under scanner because of her alleged religious conversions.

Kamali Soren, who is also known as Guru Maa in and around Gazole of Malda, has got the award for her “social work”.

“She was instrumental in persuading several tribal people, mostly Christians and some Muslims, to embrace Hinduism as part of Sangh Parivar agenda by offering monetary and other incentives. Her selection as a Padma Shri awardee has raised several questions even in her locality,” said Krishnendu Choudhury, a former minister and a senior Trinamul leader of the district.

Soren, 50, said she encouraged people to “return to Hinduism”. “I help those who changed their faiths return to Hinduism. In the past 25 years, I helped several people embrace Hinduism again,” she told The Telegraph.

According to Soren, a resident of an ashram at Kotalhati village in Gazole 1 panchayat of Malda, she goes around tribal and Dalit-dominated villages, interacts with the marginalised people and propagates the tenets of Hinduism.

“I have taught many tribal families the basic rituals of Hinduism. I speak of the basic practices like the need to keep and worship “Tulsi” plants in every household and believe it is my duty,” she said.

The All India Vanvasi Kalyan Ashram that was opened in 1952 is known to work among tribal people and has its branches spread across the country.

Last year, a mass marriage of tribal girls, organised by Soren, had to be cancelled amid allegations by local people that there were plans to “forcibly convert” the would-be couples to Hinduism.

Her selection drew criticism from the Congress and the Left. “It is unfortunate that the award has been used as a political instrument before the Assembly elections. I have serious doubts whether even the residents of Gazole block are aware of this social worker,” said Ambar Mitra, the district Left Front convener.

Ajay Ganguly, a vice-president of the BJP in Malda, said: “She is the pride of not only the tribal community but also the entire district. Any attempt to demean her achievement would be suitably answered by people who take pride in Kamali Soren’s Padma Shri.”