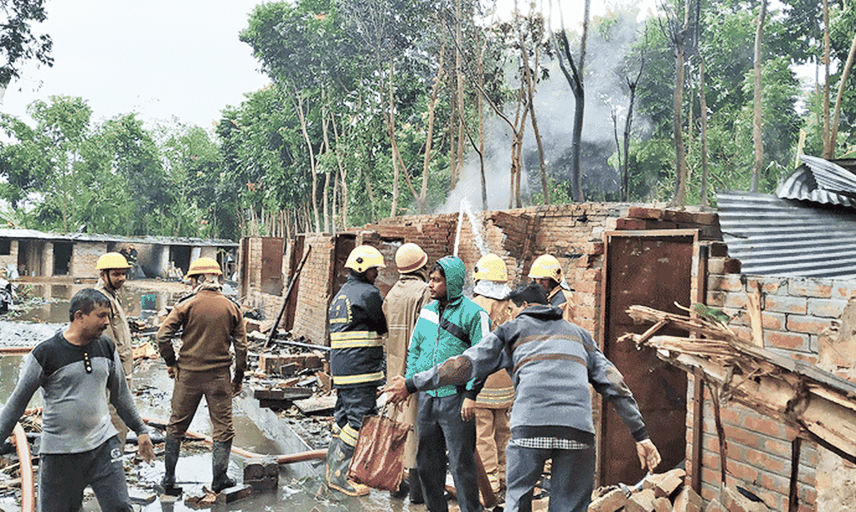 A police team investigating the January 3 blast at an illegal firecracker unit in Naihati, in which five persons had been killed, found out that a Madhya Pradesh-based racket was supplying explosive materials to unauthorised factories in the area.

Balaram Sau, one of the alleged kingpins of the supply racket, was arrested from a hideout in the Bagmore area of Kanchrapara town on Monday.

He was produced in the additional chief judicial magistrate’s court in Barrackpore and remanded in police custody for five days. Sau’s arrest is the second in connection with the blast on January 3. The police had arrested the factory owner, Noor Hussain, on January 4.

Police sources revealed that week-long interrogation of Noor had led to Sau.

“Sau claimed he had supplied explosives only for the production of crackers. We are waiting for forensic reports that can ascertain the real nature of the explosives he might have supplied,” an investigating officer said.

“He used to bring explosives and chemicals from the hilly areas of Madhya Pradesh to illegal units in Devok. Not just in Devok, Sau had also supplied items to several parts of eastern India. It is yet to be ascertained if these materials were used in making bombs for miscreants in the area”, the officer added.

A police officer involved in the investigation said Sau had been booked for “negligent conduct while dealing with an explosive substance”, “culpable homicide not amount to murder” as well as several sections of the West Bengal Fire Service Act and Explosive Substance Act, 1908.

On January 3, five persons had died in an explosion at an illegal fireworks manufacturing unit at Devok in Naihati.