This diplomat is full of stories. He talks about his first visit to Seychelles in 1977 and his return to the island with a job and 2,000 books more than a decade later. He shares how he accidentally swallowed a fly during his first visit to Calcutta in 1991 and how he discovered a link with Tagore through his great aunt. 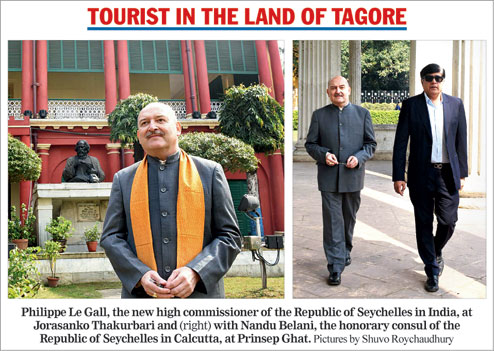 Calcutta: This diplomat is full of stories. He talks about his first visit to Seychelles in 1977 and his return to the island with a job and 2,000 books more than a decade later. He shares how he accidentally swallowed a fly during his first visit to Calcutta in 1991 and how he discovered a link with Tagore through his great aunt.

One could not miss the humour in his voice as Philippe Le Gall, the new high commissioner of the Republic of Seychelles in India, narrated one colourful anecdote after another during a tour of the city.

The French-born ambassador, who took over in February, was here to promote tourism to Seychelles, an archipelago of 115 islands in the Indian Ocean.

Le Gall's first stop was the Indian Botanic Garden, where he saw the country's only female Coco-de-Mer plant that had been imported from Seychelles in 1884. "Our country has 6,000 coco-de-mer trees while India has only one. Scientists have requested for its male and female germinated seeds," he said, already mulling ways to keep the request.

He plans to initiate a memorandum of understanding between the botanical gardens of Calcutta and Seychelles to help in the exchange of expertise and scientific knowledge.

Le Gall is keen on importing wellness, yoga and knowledge of alternative medicine from India and giving lessons on eco tourism in return. "Spas and yoga camps are a hit with high-end tourists these days. If we can offer that to our visitors along with the lovely beaches it will be a good deal."

Since 2015, Seychelles has seen a 45 per cent rise in the number of tourists from India, Le Gall said. A thrice-a-week direct flight from Mumbai has taken the tourist inflow up by a further 25 per cent since last year. "By next year we will also explore how to increase the tourist footfall from the east to Seychelles," he said.

Tour operators consider Seychelles the new hotspot for honeymooners and adventure sports lovers. "We are flooded with enquires both from corporates and wedding planners. Seychelles can be an ideal destination for them," said Nandu Belani, the honorary consul of the Republic of Seychelles in Calcutta who met several tour operators in the city.

Le Gall himself played the perfect tourist, stopping by Jorasanko, the Academy of Fine Arts and Prinsep Ghat.

As the ambassador went around Tagore's living quarters, taking in the bits and pieces of history, he was overwhelmed. "It's too much to absorb... My great aunt Christine Bossenec translated some of the bard's works into French. She was in charge of a girls' hostel in Santiniketan in 1933," said Le Gall who has read Tagore's works both in English and French.

An art connoisseur, Le Gall's final stop was the Academy of Fine Arts. "When I travel to a new place I make it a point to drop in at the art le Galleries. I like to rediscover a city through its local art and culture. It teaches me a thing or two about a city's sensitivity," said Le Gall.

A writer on the side, Le Gall hopes to include some of his experiences in Calcutta in his new collection of short stories.