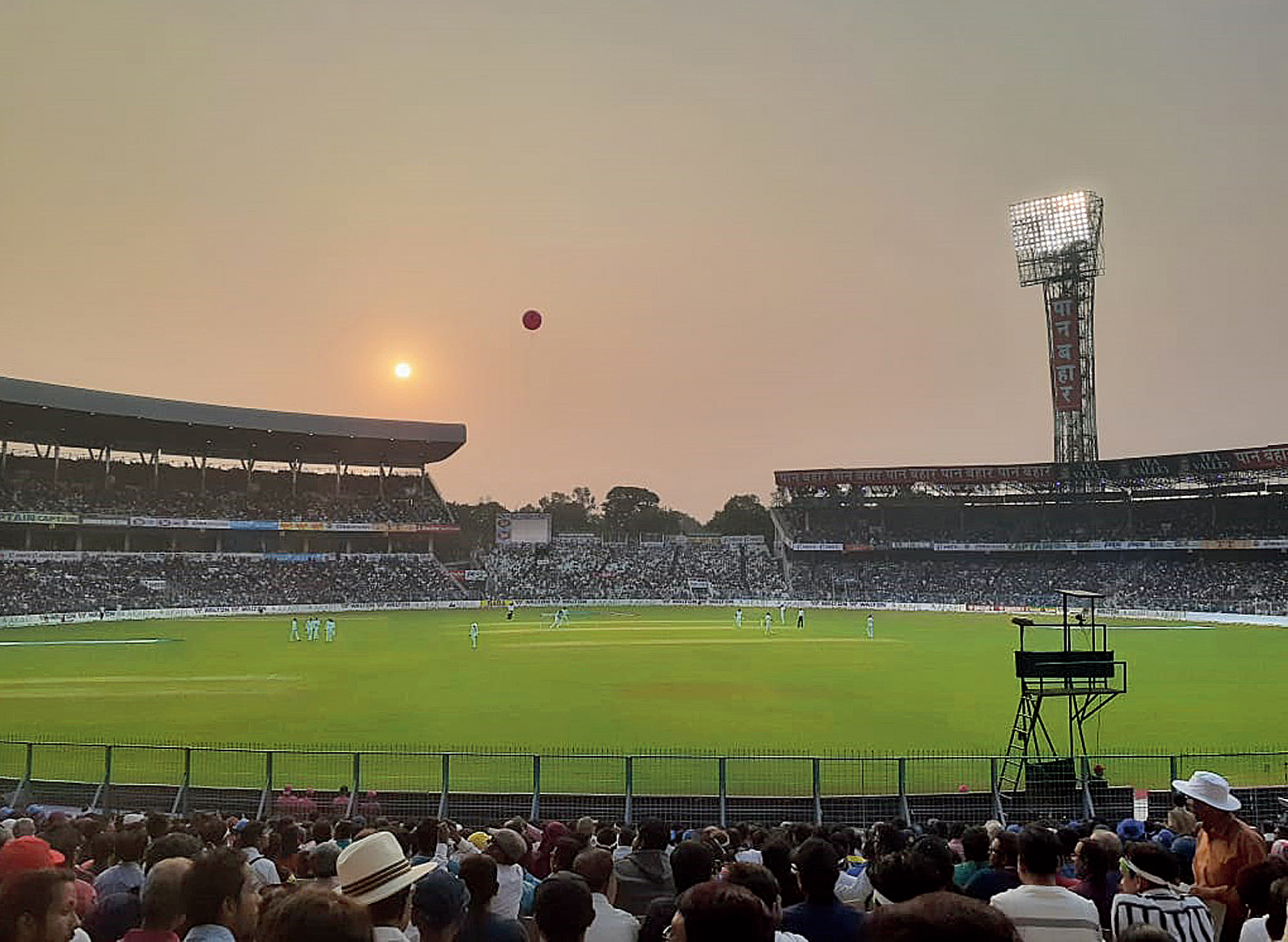 Floodlights come up as the sun sets over the Eden Gardens during the day-night pink-ball Test between India and Bangladesh on Friday.
Picture by Debraj Mitra
Debraj Mitra And Aditya Nag   |   Calcutta   |   Published 22.11.19, 09:11 PM

All roads led to the Eden Gardens on the first day of the pink-ball Test. People came from all over. They came dancing and cheering. The atmosphere transcended cricket and lent a festive fervour to the stadium. Friday’s Eden reminded a senior citizen of another match at the same venue 28 years ago.

“The same festive spirit was there when South Africa played (the first ODI in the Freedom Series) here in 1991 after the exile. Your father was in college then,” a grey-haired man was heard telling his companion, a kid in an Indian shirt with ‘Rohit’ written on the back, as they walked into the Club House

What Metro saw at the cricket carnival

Around 12.45pm, a few hundred are standing in a queue at the stairs of just one block of Gate 3, waiting to enter the stadium. The spring in their steps is a stark contrast to the usual lethargy associated with the post-lunch session of a normal Test. “Math-ta dekh. Aaro sundor laagchhe (Look at the ground. It is looking prettier),” says a young man in a group.

It was a star-studded pink-ball party. Sachin Tendulkar, dressed in a sharp suit, appears for the first time on the giant screen during the supper break. Cue for the galleries to belt out the “Saaaachin Saaaachin” roar. Some things never change. But it was not only about Sachin. On Friday, Eden had her favourites — from Harbhajan Singh to V.V.S. Laxman and a certain Mohammad Azharuddin.

Cricketers were not the only stars of the occasion. Sheikh Hasina and Mamata Banerjee rang the ceremonial bell before the start of the match. The Prime Minister’s sari had a fair splash of pink. Mamata’s sari had a touch of pink.

The clock shows 1.32pm and India draws first blood. An Ishant Sharma cutter comes back to hit Imrul Kayes in the pad. Big appeal and the finger goes up. The batsman goes for a review but the third umpire confirms the dismissal. The stands erupt.

Mohammed Shami, the pacer from Uttar Pradesh who calls Bengal home, marks his run-up in the eighth over. The crowd goes berserk, chanting his name. Taking a cue, the pacer unleashes a bouncer that catches Shadman Islam, who is caught off guard. A few more bouncers later, another batsman is seen saying something to the umpire. A mean Calcuttan says: “Bolchhe khub jore ball korchhe sir. Ektu aaste korte bolun (He is complaining to the umpire about Shami’s extra pace)”.

During the supper break, 20 breast cancer survivors are felicitated by Sourav Ganguly and Abhishek Dalmiya, the CAB secretary. Sachin Tendulkar, Rahul Dravid, Anil Kumble , V.V.S. Laxman and the first Bangladesh team that played in a Test against India, are present during the felicitation.

Around 3.45pm, the lights come on. An hour later, the sun sets between two giant towers at the high court end. Usual time for umpires to close the day’s play. But not on Friday. By 5pm, the lights are in full glow as 13 players, in Test whites, go about their business. The crowd seizes the moment and hundreds turn on their mobile cameras to capture the scene.

The pink ball finds purchase among Calcuttans. “Ki shine korchhe re (Look at the shine),” is heard multiple times in the gallery. From Block C of Gate 4, the ball is visible throughout the day. When it is not, it is because of the lightning speed of Shami and company.

Fifth ball of the 13th over, Rohit Sharma departs. Enter the Indian captain. The decibel level goes up several notches. Next ball, Kohli goes off the mark with an edge, rather cheekily. Two overs later, Kohli compensates the gallery. Abu Jayed bowls a good-length ball near his off stump. Kohli takes a confident stride, gets close to the pitch of the ball and drives between mid-off and extra-cover. The decibel meter shoots past the roof.