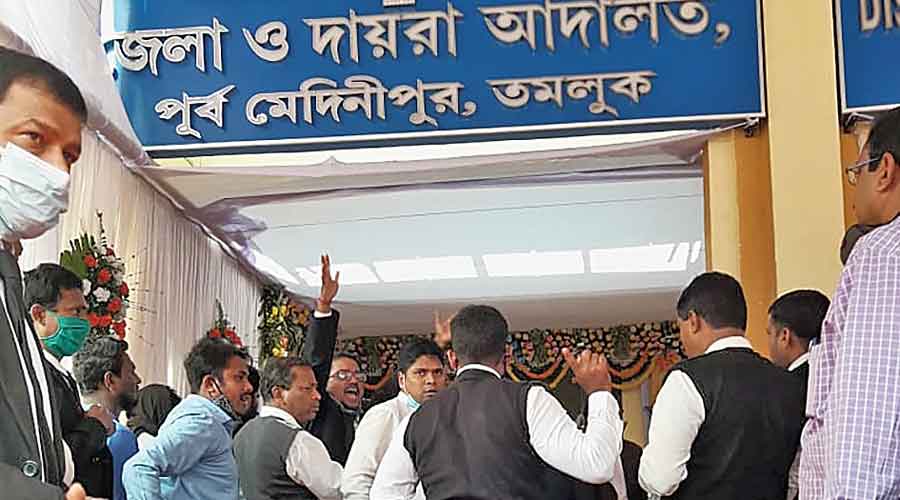 Lawyers outside the newly inaugurated building of the district court in Tamluk on Tuesday.
Anshuman Phadikar
Anshuman Phadikar   |   Tamluk(EastMidnapore)   |   Published 15.12.21, 12:42 AM

The East Midnapore district bar association called for ceasework at Tamluk’s civil and criminal courts from Tuesday till Friday to protest against alleged misbehaviour by the district judge during the inauguration of a new court building.

The lawyers said district judge Gopal Karmakar’s “inappropriate behaviour” was towards a few advocates who had laid out chairs on a lawn in front of the new district court building. They laid out chairs on the lawn to protest the fact that authorities did not include an advocates’ waiting room in the new structure.

“We have been requesting judge Karmakar for almost a decade to provide us with a waiting room at the new building, like the one that exists at Calcutta High Court. But our pleas seem to have fallen on deaf ears,” said bar association secretary Sankar Karak.

“Moreover, the judge misbehaved with a few advocates who had arranged chairs on the lawn in order to mimic a waiting room,” added Karak.

The ceasework will involve over 1,000 advocates and law clerks.

Sources said members of the bar association had demanded a formal apology from Karmakar.