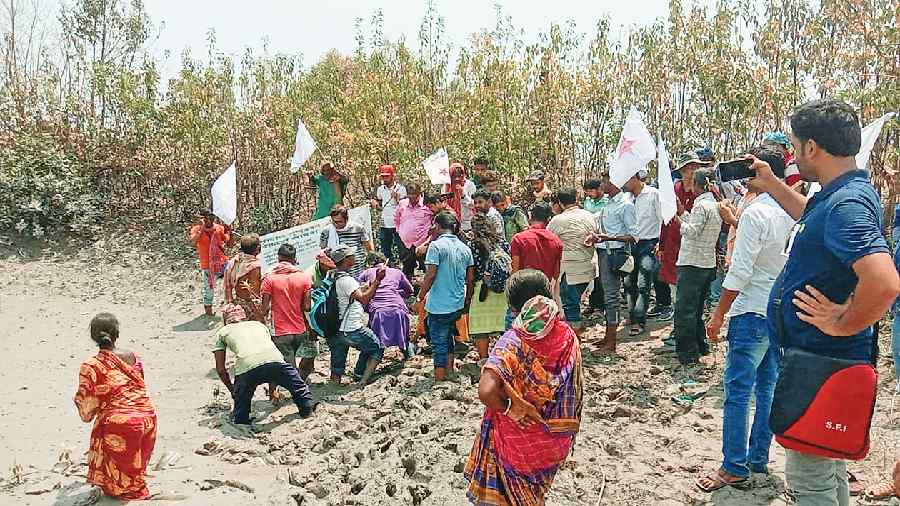 The mangrove plantation drive by the DYFI at Hemnagar in Hingalganj on Monday.
Pashupati Das
Subhasish Chaudhuri   |   Calcutta   |   Published 27.04.22, 03:25 AM

The Democratic Youth Federation of India has started an endeavour to save the Sunderbans’ mangroves in the run-up to its 11th All India Conference scheduled to be held in Salt Lake, Calcutta, from May 12.

Ahead of the four-day national conference, a team of DYFI activists led by state committee secretary Minakshi Mukherjee on Monday visited Hemnagar village in Hingalganj, which is a part of the Sunderbans delta, to plant, along with local residents, over 1,000 mangrove saplings.

Around 500 people joined hands with Mukherjee and other activists of the DYFI, which is the youth wing of the CPM, to plant mangrove saplings, including goran, gewa-keora, hetal, and sundari along the bank of the Raimangal, where repeated breaches in dykes result in inundation of adjacent areas during high tidal waves and cyclonic storms.

Mangrove plants are shrubs or small trees that grow in coastal saline or brackish water fast and can at the same can prevent soil erosion due its strong netted roots.

Although destruction of mangroves in the region had largely been caused by back-to-back cyclonic storms during the past few years, local residents said that gangs involved in felling trees for easy money had a major hand in the loss of greenery in the Sunderbans.

As per the assessment done by the state government, about 28 per cent of the Sunderbans, which spanned over 9630sqkm, was damaged during Cyclone Amphan.

“We have taken up the initiative in view of the national conference. As we regularly fight to ensure people’s right to work, education, income, food and other issues, we have taken up a fight to protect our nature,” said Minakshi.

“The mangrove is an indispensable part of the Sunderbans and is of invaluable importance to the biosphere of the region. However, a section of unscrupulous people with the support and negligence of people in the administration are engaged felling the trees. This has been making a serious impact on the lives and livelihood of the people living in the delta. We need to protect their rights and at the same time we need to develop the mangrove here again,” she added.

While undertaking a restorative plantation drive in the barren zone of the delta that needs protection, the DYFI leadership has plans to undertake an awareness drive among the local people so that they can resist any attempt to damage the forest.

“It is a fight against those who have been trying to use nature and forest to build their own property. This fight is not just in Bengal, rather it is a pan-India initiative to save rivers, forests and greeneries. We will save nature from pollution and unscrupulous people as well,” the DYFI leader said.

DYFI's four days national conference will be held in Salt Lake and the venue has been named after legendary Argentine footballer Diego Maradona.