According to the 2011 census, the state has a population of 9.12 crore, of which only 29.54 lakh people attended the camps on the first three days 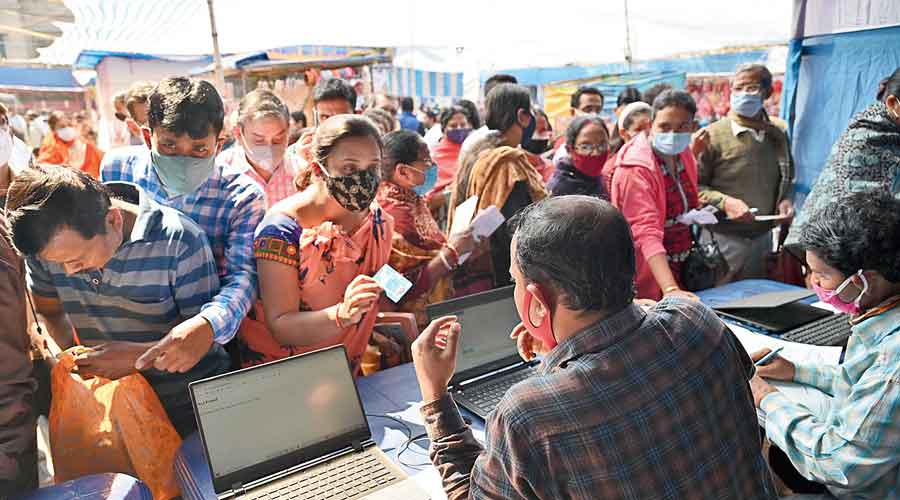 The third edition of the Duare Sarkar camps that started on February 15 is witnessing much lower footfall compared with the earlier editions, a development that has led the top brass of the state administration to believe that the majority of the population has already been covered by the welfare schemes.

According to a report collated by Nabanna based on feedbacks received from the districts on the first three days of the camps, only 3.24 per cent of the state’s population attended the camps this time.

“According to the 2011 census, the state has a population of 9.12 crore, of which only 29.54 lakh people attended the camps on the first three days. This is much less compared with the first two editions when total footfall had crossed the 1-crore mark in the first three days,” a senior government official said.

Sources recalled that they were flooded with applications during the first edition of the camps as many people were still not covered by welfare schemes such as old age pension or cheap food grains.

During the second edition that was held after the Assembly polls last year, there was a rush at the camps as people, particularly women, wanted to register their names for Lakshmir Bhandar scheme.

“About 1.69 crore beneficiaries had registered their names for the Lakshmir Bhandar during the second edition of the camps. It appears that as a majority of the people are already receiving benefits under several schemes, the footfall at the camps is not that high this time,” said a senior bureaucrat.

Officials feel that those who could not register their names in these two schemes earlier are visiting the camps this time.

"Less footfall in the camps gives a relief to the state administration for two reasons. First, it shows that delivery of services from the government is good and second, lesser applications means lesser burden on the already stressed state exchequer," said a bureaucrat.

The state government has been spending almost Rs 25,000 crore annually to run welfare schemes since the launch of Lakshmir Bhandar.

“If a huge number of applications come under the schemes such as Lakshmir Bhandar or old-age pension, the exchequer would be stressed further. It is good that the stress on the state exchequer would be much less after the third edition of the camps," a finance department officer said.

A section of the officials said the number of beneficiaries under Lakshmir Bhandar was expected to touch 2 crore from the existing 1.69 crore after the third edition of the camps.

"This could put an additional burden of Rs 3,000 crore on the state exchequer. The state has to arrange the funds anyway," another official said.