Don't touch me, you are a woman: BJP's Suvendu tells female cop during protest march

Asserting that he was a 'law-abiding citizen', Suvendu demands that male police officers be called for speaking to him 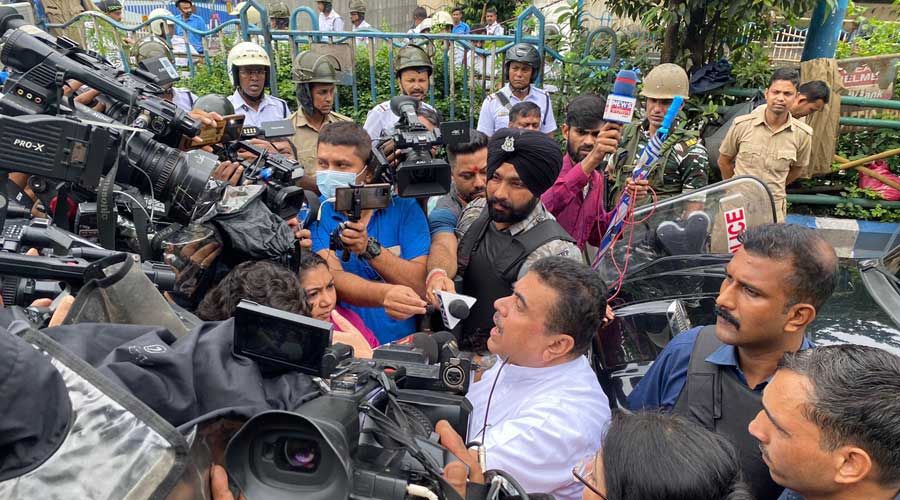 Leader of Opposition in West Bengal Assembly Suvendu Adhikari took umbrage at police women trying to detain him on Tuesday amid a protest march by his party as he was heard shouting "don't touch me" on being forced to board a prison van.

Adhikari was stopped near Police Training School in Hastings area, where barricades were put up to block the BJP supporters from moving towards state secretariat 'Nabanna' in Howrah.

"Don't touch me... you are a woman," he said as some female police personnel were trying to escort him to the prison van.

Asserting that he was a "law-abiding citizen", Adhikari demanded that male police officers be called for speaking to him.

Adhikari was thereafter escorted to the prison van by DCP (South) Akash Magharia.

He later said that he did not retort, despite being manhandled , as he respects women.

"I see Maa Durga in the eyes of every woman," Adhikari was heard saying in a video posted on Facebook by party MP Locket Chatterjee, who was also detained along with him and BJP leader Rahul Sinha.