In white amid Black Caps 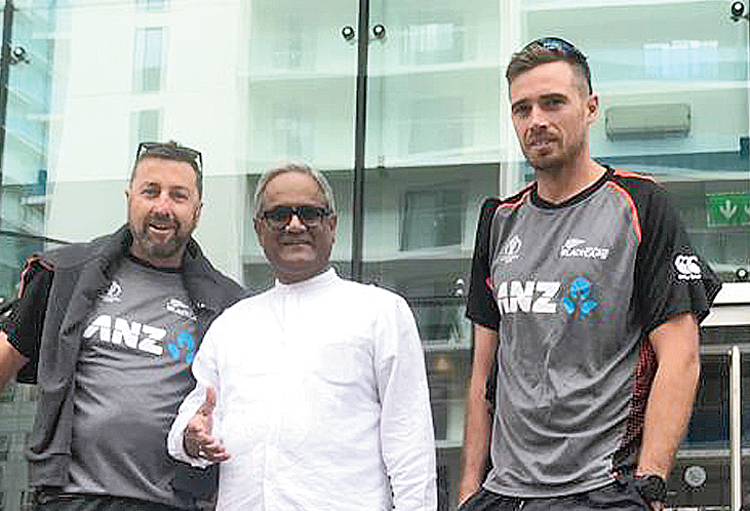 Rabin Chakraborty with seamer Tim Southee (right) and another member of the New Zealand squad.
(Pic by authors)
The Telegraph   |   Published 08.07.19, 11:22 PM

A city known as the home of the Red Devils has been painted in blue on the eve of India’s semi-final clash with New Zealand in the World Cup. A doctor couple from Calcutta — interventional cardiologist Rabin Chakraborty and his wife Arundhati Chakraborty, a radiation oncologist — report for Metro what travelling to and being in Manchester was like ahead of the big match.

Fans on a plane

The Emirates flight left Dubai at 3.10am on Sunday. On the plane, we met a group of six Indian fans from Mumbai headed for the knockout matches. Two in the group were doctors and we hit if off instantly.

We were huddled near the bar on the upper deck of the business class on an Airbus A380. Most of the members were quite young and seemed to be taking the semi-final match as a mere formality. “The final, whoever the opponent, is going to be tough,” said one of the doctors.

Our chatter drew the attention of a flight steward. He came up to us and said he was a West Indian. Not surprisingly, he said he was terribly disappointed with the team’s performance. “After many years, we were one of the favourites. What a waste,” he sighed in despair.

With the Caribbeans out of the cup and perhaps to lift our spirits, the man said he would be backing India now.

Immediately, some of the younger members of our group started hugging the steward. Several British fliers looked amused.

Our flight landed at the Manchester airport at 7.30am local time on Monday. A large group of fans, 90 per cent of them Indians, had already gathered at the immigration. I had spent two decades practising in the UK and have a lot of memories of Manchester. The airport used to be a lot emptier before. The number of planes, people and vehicles in the car park — all seemed to have grown manifold.

While looking for a taxi to our destination — The Lowry Hotel in Salford, Greater Manchester — we came across a British gentleman of Bangladeshi origin. He believed that India was the best team in the tournament and Virat’s men deserved to lift the cup. He proved to be a good Samaritan and insisted that we took a train instead of a taxi since the hotel was near the Manchester Piccadilly station.

The airport had changed a lot but the English weather was as fickle as always. When we landed, it was bright and sunny outside. The temperature hovered around 22 degrees. We boarded a train from the Manchester airport around 9.30am and reached Piccadilly station within 30 minutes.

By the time we came out of the station, the sky had turned overcast and the temperature dipped two notches. The weather portals said there was a 30 per cent chance of rain on Tuesday.

At the station we boarded a bus that dropped us at Kings Road, a stone’s throw from our hotel. The road had plenty of Indian fans, beating drums in blue jerseys. At the reception, we were greeted by a young man from Kerala who was excited to hear that we had come to cheer for the Men in Blue. Seconds later, my wife spotted the New Zealand squad arrive at the hotel.

The first to check in was Kane Williamson, the Kiwi captain. He was headed to the sixth floor. On TV, he looks extremely lean. In person, he looks well built. The rest of the squad was still at the courtyard.

My wife and I went up to them and introduced ourselves. The players were quite friendly. One of the support staff members said it was nice to see a doctor couple so enthusiastic about cricket. They readily obliged when we asked for pictures. A handful of Kiwi fans were also present and cheered their team.

Another member of the support staff said the team would go to the Old Trafford stadium for a practice session around 4pm. A team bus was waiting outside. Overall, the team looked quite relaxed. If there were nerves, they did not show.