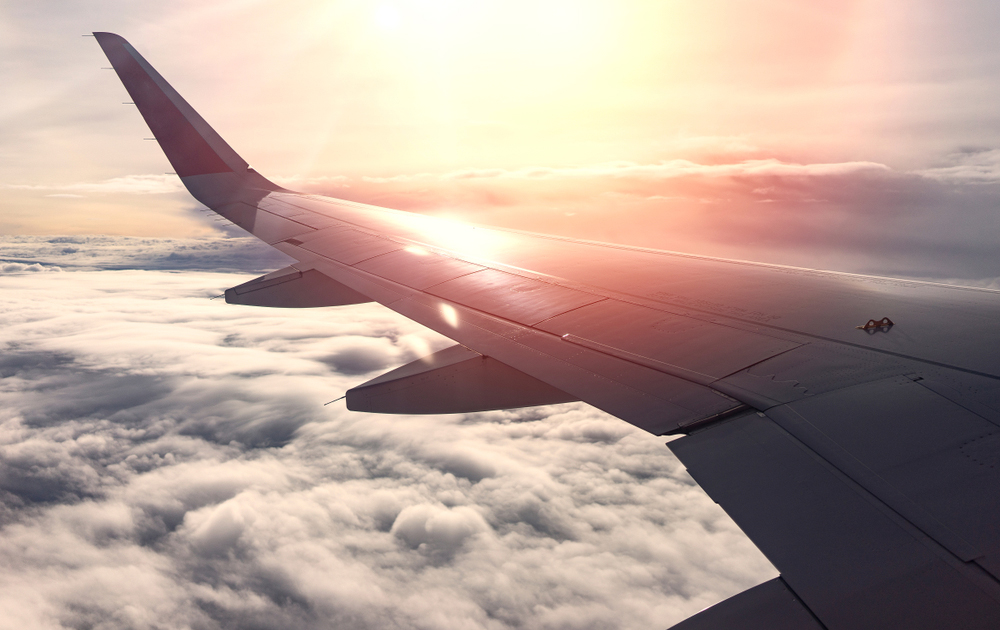 Last-minute fares for flights to Calcutta from Mumbai, Delhi and Bangalore surged four to five times on Friday and Saturday as tens of thousands of people working outside are returning home for the festival of lights.
(Shutterstock)
Sanjay Mandal   |   Calcutta   |   Published 25.10.19, 08:33 PM

Air fares to Calcutta are soaring this Diwali after a slump during Durga Puja.

Last-minute fares for flights to Calcutta from Mumbai, Delhi and Bangalore surged four to five times on Friday and Saturday as tens of thousands of people working outside are returning home for the festival of lights.

Travel portals showed on Friday evening that the one-way fare from Bangalore to Calcutta for a late night flight on Friday was around Rs 39,000.

The one-way fare from Mumbai to Calcutta on Friday night was almost Rs 26,000, compared with the usual fare of around Rs 5,000.

Even those who had booked well in advance felt the Diwali pinch.

She had to pay Rs 20,000 when she booked the return ticket in July. The return fare on the Calcutta-Mumbai route is usually around Rs 10,000.

A Calcuttan now living in Bangalore said two of his friends were planning to visit home with families on Diwali. But with the fares shooting up, they deferred the visit. 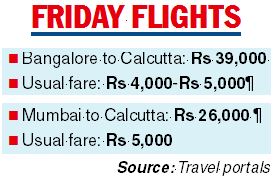 “Business is not good. They didn’t want to spend around Rs 50,000 for the home trip,” the Calcuttan said.

“Business was bad during Durga Puja. It was much lower than expected. And it continues to be so. But for this weekend, the demand has gone up and most of our flights are full,” said a SpiceJet official.

He, however, cautioned that there was hardly any demand for tickets in the post-Diwali period.

“There are some who prefer to travel between Puja and Diwali. But this year only a small number of them travelled,” he said.

In the Calcutta-Bangkok sector, which has been evergreen for the aviation industry, the return fare for the weekend was around around Rs 11,000 on some flights, said sources.

One IndiGo airline official said business was 20 per cent down compared with last year. “The yield has gone down significantly,” he said. “The fare surge during Diwali would provide some boost to the industry.”

Officials of some airlines, however, said the Diwali fares this year were not so exorbitant like they used to be a few years before because of a rise in the number of flights to Calcutta and the generally lower demand.

Last year this time, Calcutta was serviced by around 440 flights every day. This year the count has touched 500.

“The increase in the number of seats is one reason why fares are not shooting up like previous years,” an official of an airline said.

“The Puja was dull and Christmas bookings are not looking bright either. We don’t have half the queries coming for winter holidays compared with what we usually get. Diwali is the only festival when the mood was upbeat this year,” said Anil Punjabi, chairman, east, Travel Agents Federation of India.

Metro had earlier reported how Calcuttans who usually go on holiday outside the city during or after Durga Puja preferred to stay home this festive season because of concerns over spending on travel at a time the country’s economy was struggling.

Several others were cutting down their travel budgets and chosing cheaper destinations.

Even a couple of years ago, flights on Puja days and just before the festival would go chock-a-block, prompting airlines to increase the flight count and cash in on the demand surge. Fares, too, would go up manifold.