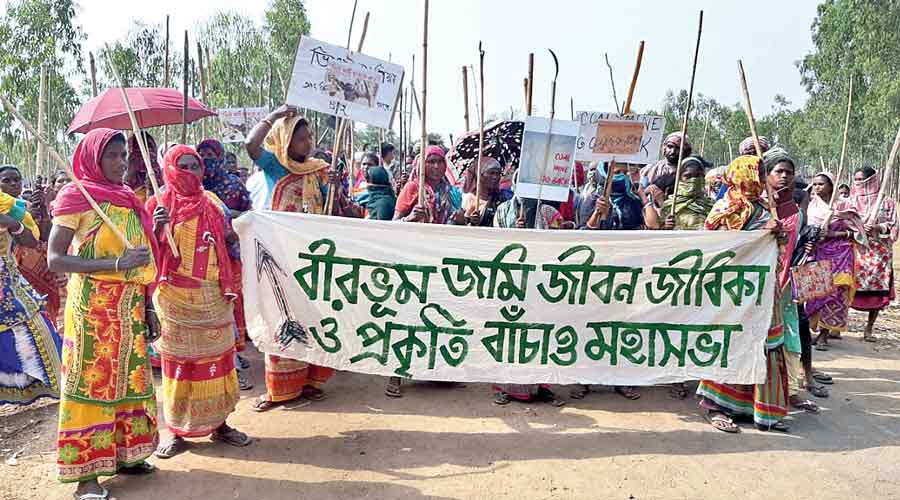 A government programme to distribute cheques and job letters among people set to lose their land to the proposed Deocha-Pachami coal mine project in Birbhum was called off on Monday following protest by around 1,000 tribal people who have been opposing the project ever since it was announced by the Mamata Banerjee government.

Sources said that Monday’s retreat by the administration was significant as it comes ahead of the two-day Bengal Global Business Summit (BGBS) starting on Wednesday where the Bengal government is supposed to showcase several key industrial projects including the proposed coal mine.

Sources said Monday’s government programme was organised in a bid to show that “normality” had returned to Deocha-Pachami. The resumption of protest has given rise to questions about the feasibility of the project that the Bengal government wants to showcase at the summit.

“We will not allow anyone to hold any such programme or discussion regarding the coal mine till the state government announces scrapping of the project in writing. A large number of people from  outside the area were brought here to organise the government programme that we resisted in a democratic way,” said Shiblal Soren, a leader of Birbhum Jamee, Jeebon, Jeebika O Prakriti Bachao Mahasabha.

A group of people from the Mahasabha on April 13 met chief minister Mamata Banerjee at Nabanna and after that put a pause on the indefinite protest against the coal mine that had begun in the last week of February following arrests of seven Calcutta-based activists including Leftist economist Prasenjit Bose. However, on Sunday, hundreds of tribal people held a meeting and decided to resume the “indefinite protest”.

“The state government is projecting the Deocha-Pachami coal mine as its flagship industrial project in the forthcoming global business summit. This is a serious error in my view because the project does not appear feasible on several grounds,” said Bose.

The Birbhum district administration had announced the programme at the playground of Dewanganj village as part of the second phase of distribution of cheques and job letters to a section of affected people on Monday afternoon. However, 1,000 tribal people under the banner of Mahasabha took out a procession with posters and placards in protest of the programme and blocked two main entry points to Dewanganj village.

The protesting tribal people alleged that the administration with the help of Trinamul brought around 1,000 tribal people by at least 20 buses from various parts of Birbhum district to make the programme successful.

Some officials went to meet the protesters but had to return in minutes as they were met by fierce opposition.

“It was a conspiracy to organise a programme in the project area without taking consent of the local people. We stopped the government from holding the programme. Why should the government bring outsiders for an event of a project facing opposition from local residents?” said a leader of the Mahasabha.

village. Many people on Monday became violent and resisted the programme. Many tribal people sided with the government but we postponed the programme to avoid untoward incidents,” said Birbhum district magistrate Bidhan Ray.