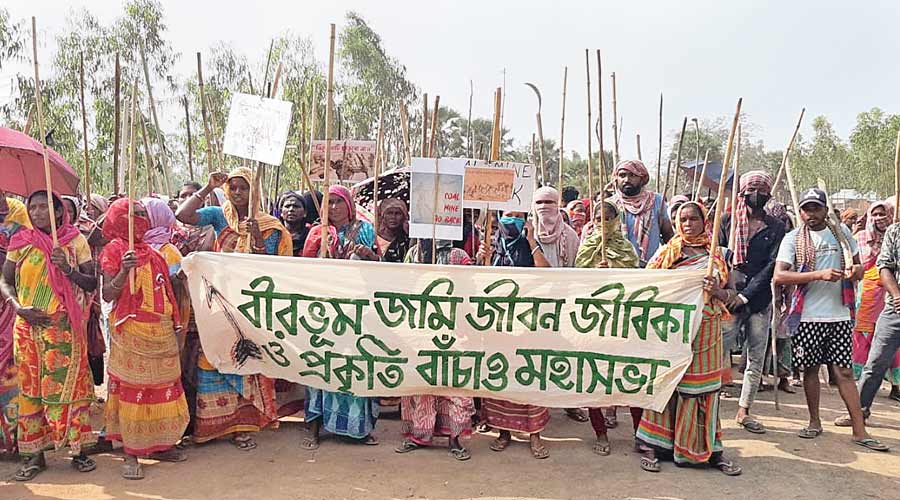 People protesting at Dewanganj in Birbhum district on Monday against the proposed coal mine.
Picture by Himadri Mondal
Snehamoy Chakraborty   |   Calcutta   |   Published 20.04.22, 01:26 AM

A team of BJP functionaries headed by Opposition leader Suvendu Adhikari and a separate group led by state Congress president Adhir Ranjan Chowdhury will meet tribal people protesting against the proposed Deocha-Pachami coal mine in Birbhum on Wednesday.

The Opposition parties’ tour will synchronise with the start of the Bengal Global Business Summit where chief minister Mamata Banerjee will be wooing industrialists for investments in the state.

The visits by the delegations of the BJP and the Congress to Deocha-Pachami prompted the Trinamul Congress to accuse the Opposition parties of conspiring against industrialisation in the state at a time when hundreds of investors from India and abroad would be in Bengal.

“The BJP, Congress and the CPM are trying to harm the future of Bengal only to oppose Trinamul blindly. The most important thing is the specific date of their visit when the state will hold the global business summit. It means they are not only political enemies of Trinamul but also the enemy of the people of Bengal,” said Trinamul spokesperson Kunal Ghosh.

BJP sources said a group of around a dozen party MLAs headed by Adhikari would visit Deocha-Pachami to meet protesting tribal people at Baromesia village around 2.30pm on Wednesday.

The BJP said the date was perfect for the visit as Deocha-Pachami was a shining example of Bengal’s state of industrialisation where thousands of tribal people are opposing the coal mine project announced by the chief minister.

Congress leaders said they wanted to be with the protesters. “The tribal people are fighting for their rights and so as a political party, it is our responsibility to be with them. Our state president Adhir Ranjan Chowdhury will visit Deocha to meet the protesters on Wednesday afternoon,” said Birbhum Congress president Miltan Rashid.

The tribal people, who are protesting indefinitely under the banner of the Birbhum Jamee, Jeebon, Jeebika O Prakriti Bachao Mahasabha, said they would not allow their platform to be used by political leaders. They said their protest was connected to their livelihood.

“Where were the BJP or Congress leaders when we started our movement? Did they come when our women were beaten up by police? We don’t want to entertain political leaders at our protest. It is our own fight and we would fight it politically. We are not interested in any political parties as politics means conspiracy,” said Lakhhiram Baske, one of the leaders of the Mahasabha.

Ramchandra Dome, the CPM politburo member, said his party was with the protesters. He added that the platform was not a place to use the party flag. “We have been with the protesters from Day One. But we don’t want to be part of the political protest as the agitators wish to keep their movement above politics,” said Dome.