Cyclone Jawad: Nabanna asks districts to be on alert

The government has ordered necessary evacuation of people from vulnerable areas, checking rescue shelters and other methods of preparedness 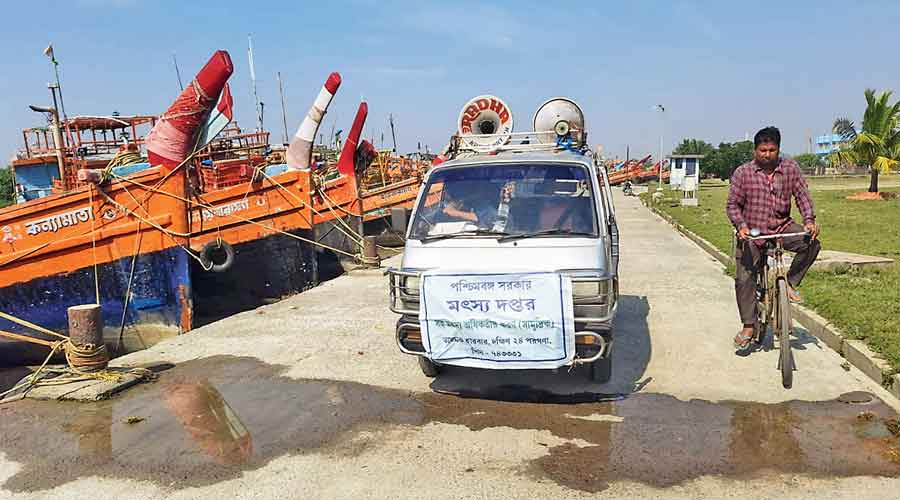 A vehicle with microphone alerts people in coastal Diamond Harbour of South 24-Parganas on Thursday to the upcoming Cyclone Jawad.
Mehaboob Gazi.
Subhasish Chaudhuri And Anshuman Phadikar   |   Calcutta/Tamluk   |   Published 03.12.21, 01:44 AM

The state government has alerted Bengal’s three coastal districts and 12 others, on “maximum preparedness” in the run-up to possible “intense low-pressure” formations associated with Cyclone Jawad that will potentially make landfall on the coasts of Odisha and Andhra Pradesh this week.

While advising necessary evacuation of people from vulnerable areas, checking rescue shelters and other methods of preparedness, Nabanna has also asked farmers to see if early harvest if possible.

The latest weather update issued by the Alipore Met office on Thursday afternoon indicates concentrated well-marked low pressure over the Southeast Bay of Bengal and adjoining Andaman sea, likely to cause very heavy rainfall (7-20 cm) in all coastal districts as well as in North 24-Parganas, Bankura, Jhargram, and Howrah starting Saturday and carrying over to Sunday.

The IMD has also apprehended that thunderstorm, accompanied by lightning and gusty winds with an average speed of 40-50kmph, are likely to batter parts of North 24-Parganas, South 24-Parganas, East and West Midnapore, Calcutta, Jhargram and Howrah. Bankura, Purulia, Birbhum, Hooghly, Nadia, East Burdwan, West Burdwan, Murshidabad and Malda are likely to face 30-40kmph windspeed during the weekend.

Chief minister Mamata Banerjee on Thursday reviewed the situation and held talks with several district magistrates, conveying her concern and asking authorities to prevent the loss of property and human life by ensuring best practices. In this connection, control rooms will be set up at the DM, SDO and BDO offices. She also advised the WBSEDCL, PWD, PHE, health, agriculture and allied departments to be prepared.

Earlier on Thursday, the administration of coastal districts responded to weather alerts and began awareness campaigns on loudspeakers, asking all fishermen to return from the deep sea.

Districts administration have advised farmers to carry out early harvesting of mature crops and to complete threshing by Friday afternoon, since the heavy rainfall might cause damage over the weekend.

Additional Director of fisheries (marine), South 24-Parganas, Jayanta Pradhan, explained: “The weather updates indicate that seawind might turn squally over the weekend days and might reach a speed of 70kmph starting on Saturday. Apprehending volatile conditions in the sea, we have called back the fishermen and are hopeful that they will return by Friday afternoon.”

At the same time, the administration has informally advised hoteliers in East Midnapore to discourage tourists from visiting Digha, Sankarpur, Mandarmani, and Tajpur owing to the threat of the incessant rain. However, the district administration will take a final call on Friday morning.

The irrigation department too has alerted its officials to be prepared for repair work on earthen dams, which might possibly be damaged by high tidal waves. Irrigation officials also advised monitoring of the situation during Sunday’s slated high tide, which might cause damage to the weaker stretches of dams.

South 24-Parganas district magistrate P. Ulaganathan said: “As a precautionary step, we have deployed two NDRF teams in Namkhana and Kakdwip, while we have also deployed two SDRF teams at Patherpratima and Sagar to ensure fast rescue operations. At the same time, we have undertaken alertness campaigning in coastal areas and are planning to evacuate around 11,000 residents from low-lying areas.”

Bengal: Govt to rope in 50 consultants to bolster administration