Bengal lockdown extended till July 1, but malls open 11am to 6pm 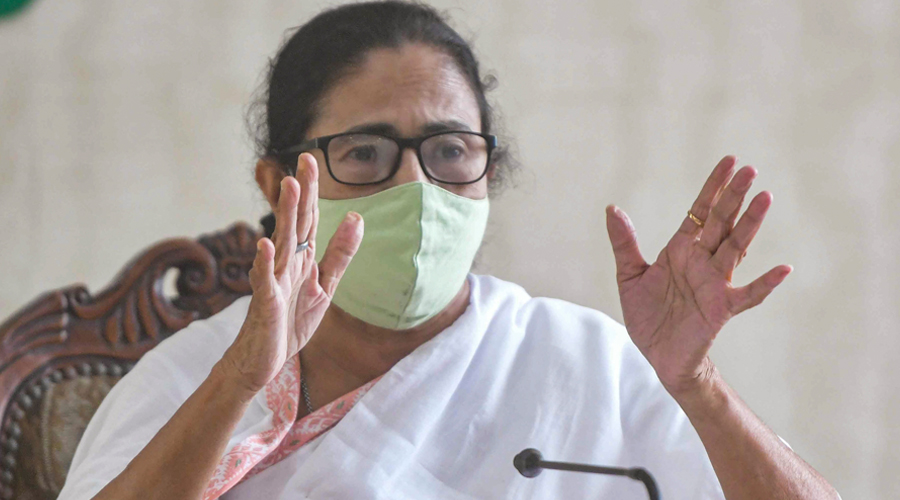 The Bengal government on Monday extended the ongoing Covid-induced lockdown till July 1, keeping in place exisiting restrictions on public transport, but eased certain curbs on offices and business establishments from June 16.

“We have allowed extension of business hours with the condition that the staff be vaccinated. We don’t want business to suffer,” said chief minister Mamata Banerjee.

Government and private offices have been allowed to work with 25 per cent staff from June 16 with hours fixed between 10am and 4pm for the latter. Also, private offices will have to ensure transportation of employees who need to attend office, for which the state government will allow e-passes.

The transport sector, including private buses, metro rail services, local trains will continue to remain shut during this time, except for the staff special trains that have been allowed to run. Taxis and autos will be allowed only in case of medical emergency. Private vehicles will not be allowed to run from 9pm to 5am. 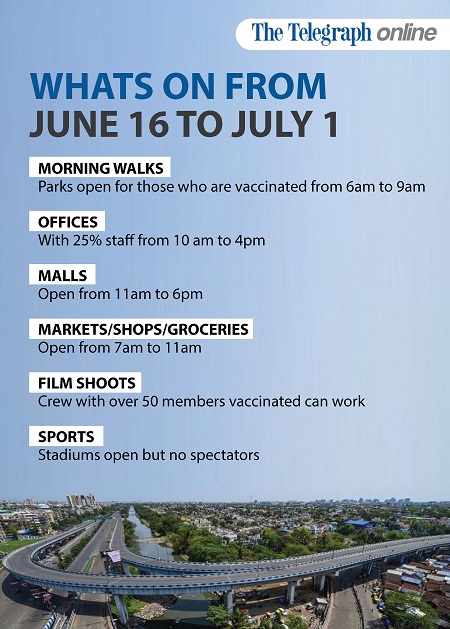 For the health-conscious Bengali, the government has decided to open parks between 6am to 9am, where only vaccinated morning walkers will be allowed. However, the government has not clarified whether first dose recepients would be prevented entry to parks. Sports activities will resume in stadiums sans spectators, while swimming pools and gymnasiums remain closed.

Local markets selling vegetables, fruits, eggs, milk, grocery, and other shops selling household necessities will be operational between 7 am and 11am. Other retail shops, including those in shopping malls, will be allowed to operate between 11am-6pm.  At shopping malls, retail shops can allow only 30 per cent customers at a given time to be catered to by 25 per cent of the work force.

Restaurant and bars can run with 50 per cent sitting capacity.

The Bengali entertainment industry is also back in business with the government allowing film and television shootings amid all Covid precautions by units with at least 50 vaccinated crew members.  “The entertainment industry had requested me. We have decided to allow them to work with all protocols followed,” said Mamata, a self-confessed fan of Bengali soap operas.

Mamata said the government had vaccinated two crore people till date. “When the elections were being held, our positivity rate (for Covid tests) was around 20-22 per cent. On the last day of polling, it was at 32 per cent. We have now brought it (positivity rate) down to 6 per cent and are working towards reducing it further,” she said.

Since the restrictions were imposed, Bengal has seen a steady decline in the number of Covid cases. In the last 24 hours, the state had registered, 3,.984 new cases. The current recovery rate of Bengal is around 97.64 per cent.