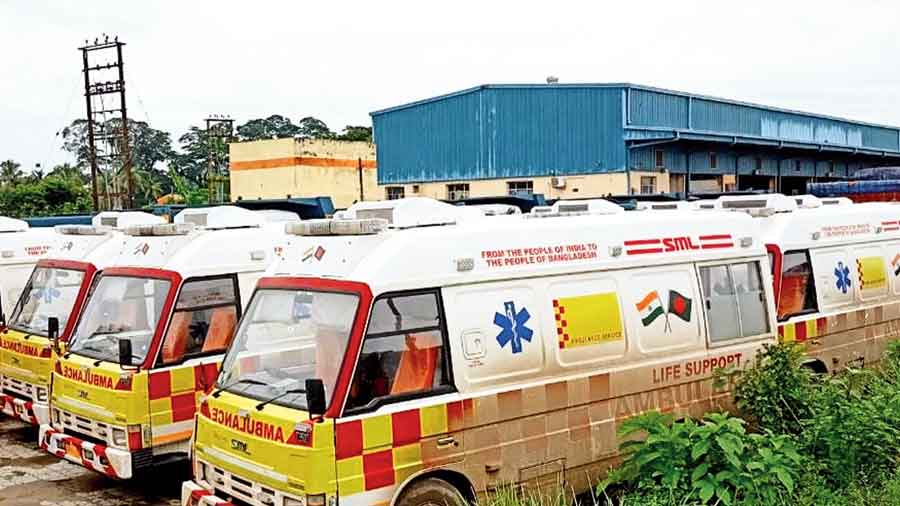 A consignment of 30 ambulances offered by India as a gift to Bangladesh to help fight Covid-19 has been cleared for movement on a priority basis.

The vehicles will set out for Dhaka from the Petrapole international check post on Saturday morning.

Bengal government on Thursday allowed the ambulances to move from Bongaon Municipality parking lot to Petrapole check post on an “out of turn” basis as special case, acting on a request from the High Commission of India in Bangladesh considering the urgent need of the vehicles in Bangladesh to fight Covid.

The first lot of 30 vehicles is a part of the 109 ambulances that Prime Minister Narendra Modi had offered to donate the Bangladesh government to help in its fight against the pandemic when he visited the country on March 26-27 to attend the golden jubilee celebrations of Bangladesh Independence and the birth centenary of Bangabandhu Sheikh Mujibur Rahman, its first Prime Minister.

Modi had on March 27 in Dhaka handed over a symbolic key for the ambulances to Bangladesh Prime Minister Sheikh Hasina, in addition to gifting 1.2 million doses of Covid vaccine as a mark of India’s support to Bangladesh.

The SML ISUZU-make ambulances reached the municipality parking in Bongaon on July 29 for clearance to reach Petrapole. A senior official of North 24-Parganas district administration said it took around two weeks to get clearance, but the ambulances were cleared faster following a request from the High Commission of India in Bangladesh.

Sources said the ambulances started to arrive at the ICP Petrapole from Thursday afternoon for Customs clearance. Superintendent of Customs (export) Avijit Mukherjee said: “We issued the clearance on top priority basis to make the vehicles ready to move on Thursday itself.”

However, sources said movement to Dhaka was eventually deferred to Saturday as Friday is a weekly holiday in Bangladesh and obtaining car passes could not be possible.

The remaining lot of ambulances is expected to reach Bangladesh in phases by the end of September this year, ministry of external affairs sources said.

Kartick Chakraborty, secretary of the Petrapole Clearing Agents Staff Welfare Association, said: “This is a great gesture by our country. Such support in times of pandemic will further strengthen the bond to improve bilateral trade between the two neighboursing countries.”