Covid: Drive to supply power to hospitals during Cyclone Yaas 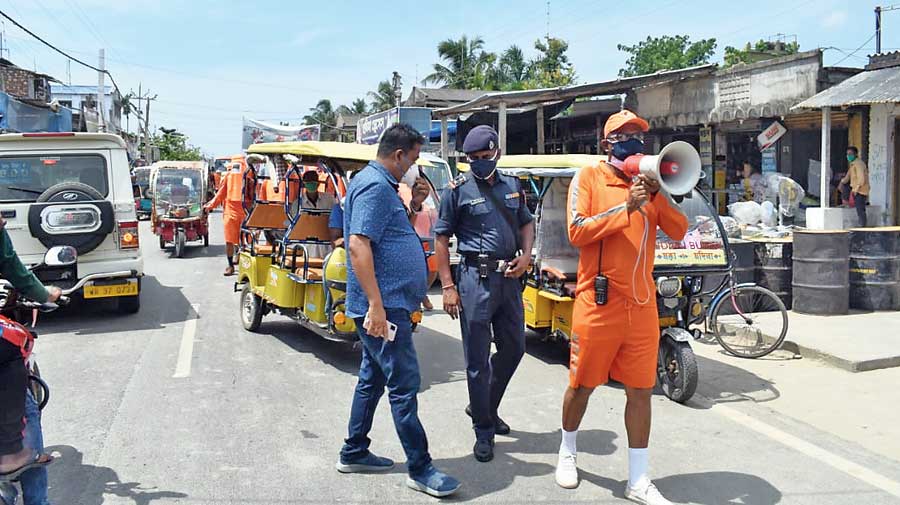 South 24-Parganas and East Midnapore, the two Bengal districts likely to be hit the hardest by Cyclone Yaas on May 26, have rented over 100 high-power generator sets to keep power supply seamless in hospitals and crematoria so that the disaster does not weaken the state’s war effort against the pandemic.

Officials in the two districts said that during Cyclone Amphan last year in May,  the Covid-19 outbreak was far from being this severe.

This time, one of the main challenges of the state government during Cyclone Yaas is uninterrupted healthcare services, even when electricity is disconnected by the state-run distribution utility in the districts to avoid accidents an hour before Yaas makes landfall.

Officials before an aerial survey in South 24-Parganas
Telegraph picture

“Power supply is a major challenge during any natural disaster. This time, our goal is to run uninterrupted healthcare services, while making sure bodies don’t pile up in crematoria,” said P. Ulaganathan, the South 24-Parganas district magistrate.

“We have hired over 50 high-power generators to keep hospitals and crematoria running in the vulnerable areas,” added Ulganathan.

There are 10 Covid-19 hospitals and 25 safe homes in South 24-Parganas, many of which are located in cyclone-prone pockets like the Sagar Island and Kakdwip.

Health officials said uninterrupted power supply is a must for treatment of Covid-19 patients, at hospitals or safe homes. Electricity is required to run equipment used to ensure enhanced supply of oxygen to those who ,need it, besides for the running of ICU beds and ventilators.

“A power cut, even for a minute, could be life threatening for a critical Covid-19 patient. Electricity is a minimum requirement for treating such a patient,” said a senior health official.

In East Midnapore, the district administration has hired 48 high-power generators for installation in hospitals and five crematoria. There are hundreds of hotels in the district, with tourism hubs such as Digha and Mandarmani, and the administration also kept generators of big hotels as back-up during a crisis.

Officials said besides the hospitals, they have been installing generators in crematoria, as one can’t wait for cremation of the dead, especially those who succumb to Covid-19.

Sources said besides generators,, the districts have already directed health officials to shift the vaccines from the cold-chain points in the vulnerable areas, such as Ramnagar and Digha in East Midnapore, or Sagar and Kakdwip in South 24-Parganas.

“We can’t preserve vaccines in cold-chain points in vulnerable areas. So, we are shifting vaccines to safe zones. We are giving priority to saving lives,” said Purnendu Maji, the East Midnapore DM.

Sources said they are also storing oxygen cylinders to meet the demand of at least four days from the day Cyclone Yaas is likely to hit.

South 24-Parganas has purchased around 30 automated woodcutters and trained a group of people to clear the roads connecting the hospitals in the district.

“We have set up separate teams for clearing of roads fast after the storm. We have also stored medicines and oxygen cylinders for the hospitals,” said a senior official.

North 24-Parganas district administration has planned to depute a healthcare worker in all school buildings used as cyclone shelters. These healthcare workers will conduct primary health check-ups of those sheltered there following evacuation from the impact zones.