Colours of protest on canvas in Park circus Maidan

'The British had divided India on religious lines. Modi and Shah are out to do the same' 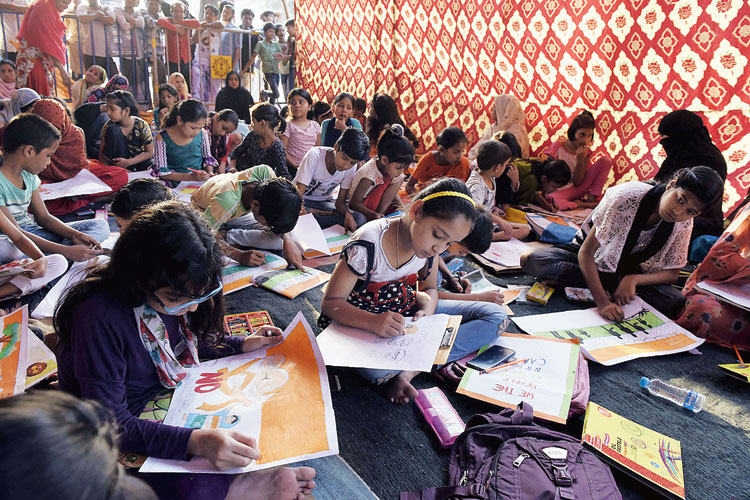 Homemakers who had never held a crayon joined children to paint and draw, giving vent to their concern about the new citizenship matrix, on Sunday.

Alisha Ali, Falak Naj and Sana Shahzada sat on the footpath next to the Belgachhia tram depot and drew the Tricolour with the slogans “No NRC No CAA No NPR” on the top of the page and “I love my India” at the bottom.

The Art Attack campaign marked the 60th day of the Belgachhia vigil against the amended citizenship regime.

Sana, a Class X student of Adarsh High School, drew a girl holding a copy of the Constitution and preventing Prime Minister Narendra Modi and Union home minister Amit Shah from striking it with a trident. At the bottom was written “NO CAA, NRC and NPR”.

“I drew the girl to represent the women spearheading protests against laws that seek to strike at the root of the Constitution,” Sana said.

“The British had divided India on religious lines. Modi and Shah are out to do the same. But people are ready to fight,” Falak said.

Faheem, a Class VII student of Tiny Tot School in Belgachhia, who drew a detention camp and two boys, one Hindu and the other Muslim, praying so that they don’t end up in the camp.

Housewife Rahat Afroza used paintbrushes to depict the alleged torture on women protesters in Lucknow’s Ghanta Ghar. “The women were subjected to inhuman torture in the dead of night as they had dared to hold a vigil in the BJP-ruled Uttar Pradesh,” she said.

The event was organised by Youth Association (Belgachhia). “Kids can best express their feelings through colours. Art is a protest tool,” said Sharique Khan.