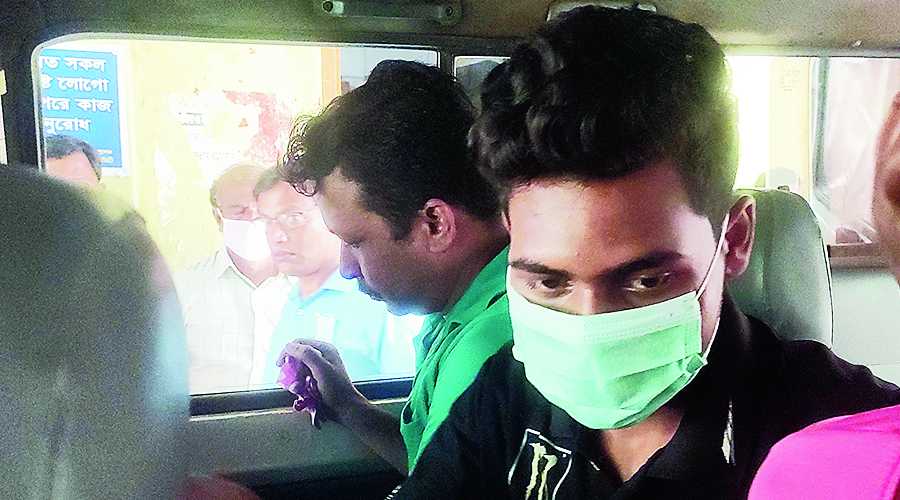 Sohail Gayali, who was arrested in connection with the girl’s gang-rape and death, being taken to the court on Monday.
The Telegraph.
Snehamoy Chakraborty And Subhasish Chaudhuri   |   Calcutta   |   Published 12.04.22, 12:49 AM

Chief minister Mamata Banerjee on Monday condemned the alleged gang-rape and the resultant death of a Class IX girl in Nadia district but simultaneously raised questions about the delay in lodging a complaint after cremating the body.

She slammed alleged move to implicate the Trinamul Congress in the incident even after her government arrested the accused without caring for his political identity.

“The incident is really unfortunate and I have no words to express my condolences to the girl’s family. The girl died on April 5 and the police came to know on April 10. Please tell me, if someone dies on April 5 and there is some doubt or complaint regarding the death, then why was the complaint not lodged on the same day?” asked Mamata after inaugurating Biswa-Bangla Mela Prangan on Monday afternoon.

Mamata also asked why the body had been cremated before post-mortem and highlighted how it would be tough for the police to find out the reason of the death.

“Why did you burn (cremate) the body of the victim (before post-mortem)? As a layman and without knowing everything (of investigation) I am asking a question that how (police) would get the evidence on whether she was raped?” asked the chief minister.

The Class IX student, a minor girl, was allegedly gang raped at the birthday party of a local Trinamul’s leader’s son on April 5 evening and later she died allegedly for excessive bleeding. The family members claimed they were forced to cremate the body — without an autopsy or a death certificate — before lodging a police complaint following pressure from a local Trinamul leader whose son was arrested on Monday.

In her speech, Mamata said she had come to know that the boy and girl were known to each other and both the families and neighbours were familiar with it.

Police have arrested BA first-year student Sohail Gayali, who is the son of a Trinamul’s panchayat member, Samar Gayali, on the charges of raping the girl, along with friends, at his home during the birthday party.

Sohail was produced in the ACJM court in Ranaghat on Monday and remanded in two weeks’ police custody. At the same time, five persons, including the girl’s mother, rural medicine practitioner, and three others persons were also produced in the court where they recorded their confessional statement under Code of Criminal Procedure 164.

Police have also detained two persons for interrogation. They include one of Sohail’s friends, who was present at the party, and suspected to have raped the girl.

In her first reaction to the incident, Mamata questioned why the name of the Trinamul congress was being tagged in such cases when her government always took steps beyond political colours.

“If anyone does some crime, action is always taken. The accused has been arrested and it was made beyond political colour. Remember (such action) do not happen in states like UP, Madhya Pradesh or Delhi,” said a furious Mamata after accusing a section of media of maligning the image of her government.

Senior Trinamul leaders said Mamata actually tried to send a message that in every heinous crime, she did not prevent the police from taking action even if the allegation came against her party’s leader.

Opposition leaders, however, criticised Mamata for her response to the incident and for raising questions regarding what had happened to the girl.

“She should concentrate on maintaining law and order, ask the police to do their jobs and stop her party’s hooligans. Just like RSS has spoken during the Unnao, Hathras and Asifa incidents, she is doing the same thing in Bengal.

This is the UP-isation of Bengal by her,” said Md Salim, CPM state committee secretary.

“The incident in Hashkhali is the worst in recent history. The girl was cremated only to erase evidence. This is the biggest crime. An MLA delegation led by me will reach the village on Tuesday at 3pm. If the family demands CBI we will provide them all sorts of support. The people of Bengal who voted for Mamata Banerjee must now think what have they signed up for. Is this how a chief minister speaks?” said Suvendu Adhikari, leader of the Opposition in Bengal assembly.

Adhikari on Monday met governor Jagdeep Dhankhar who sought an urgent response from the chief secretary, H.K Dwivedi, regarding the incident.

The high court admitted two petitions in connection with the incident. The cases are likely to be heard soon, said a high court source.

Speaking on the alleged rape and the death of the minor, the chairperson of West Bengal Commission for Protection of Child Rights, Ananya Chatterjee Chakraborti, said a local doctor who was approached by the girl's parents should have informed the police.

“In suspected Pocso cases, it is mandatory for a doctor to inform the police,” said Chatterjee Chakraborti, who was scheduled to visit Hanskhali later in the day.

“The role of the crematorium is also under the glare. How could they allow the burning of the body without a certificate,” she added.