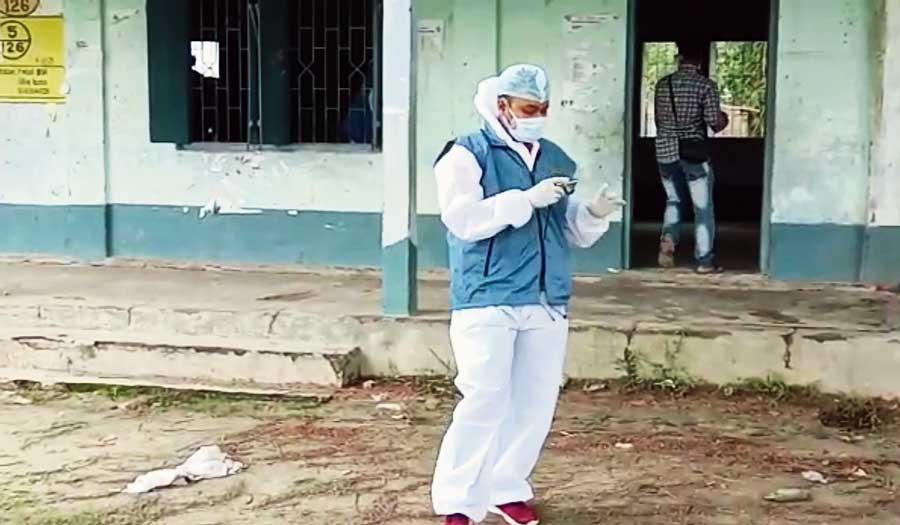 A three-member team of ballistic experts from the Criminal Investigation Department (CID) on Monday visited the school in Cooch Behar’s Sitalkuchi that was a polling booth on April 10 during the Assembly elections, where four voters were killed in the CISF firing.

The state police had handed over the probe to the CID soon after the firing by CISF personnel manning the 5/126 booth  at Sitalkuchi's Jorpatki village.

The CID team on Monday, along with some officers of the district police, which reached by 11.30am the Amtali Madhyamik Siksha Kendra, thoroughly inspected the entire school premises and building for over two-and-a-half hours.

They also spotted a bullet mark on the blackboard of a classroom.

“During probe, it was found that one of the bullets had pierced the door of the classroom and hit the blackboard. This indicates some bullets were fired even inside the booth,” said a source.

The CISF personnel had claimed they were forced to open fire after some villagers attacked and ransacked the booth.

The CID ballistics team used chemicals in certain locations where bullet marks were found and measured distances between marks with tapes.

“Earlier, another CID team had visited the site to reconstruct the incident. But this visit of the ballistic team that comprises forensic experts is significant. It is evident that the CID is giving due importance to the case and is collecting all possible details,” said a senior police officer.

After the probe, the team sealed the school building and put up a notice to restrict the entry of people on the premises.

So far, the CID has interrogated a number of persons, including some police officers of Mathabhanga, the subdivision under which the school (polling booth) falls. However, there are reports that the CISF personnel who had opened fire have not appeared before CID sleuths though they have been called for interrogation.

Residents of Jorpatki, who have said they want the guilty CISF personnel to be punished, sounded hopeful at the visit of the ballistic team. “The state government has stood by the four bereaved families. We are confident that justice will be served,” said Alizar, a resident and a Trinamul leader.