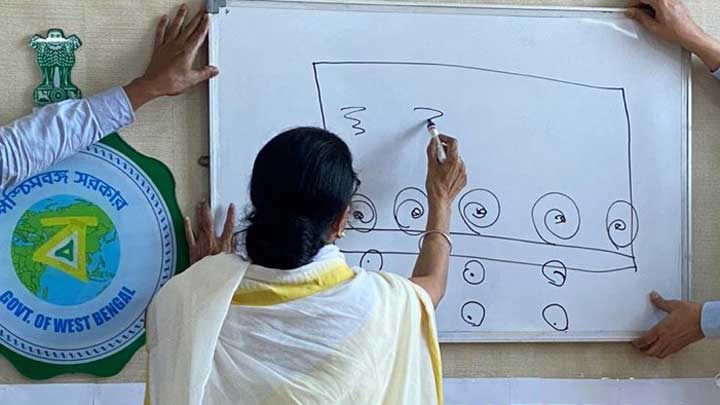 Mamata illustrates through a drawing how social distancing should be observed while waiting in queues before shops to buy essential commodities during the lockdown.
(Twitter/@CPKolkata)
Pranesh Sarkar   |   Calcutta   |   Published 25.03.20, 08:50 PM

Chief minister Mamata Banerjee on Wednesday issued a slew of instructions to the state administration in an attempt to ensure that supply of essential commodities and services remains disruption-free during the lockdown.

The chief minister specified that police should not stop delivery of essential items and services.

“I am instructing all police stations to ensure that the home delivery of essential items is not prevented. People should not be deprived of essential services either. District magistrates should also take the responsibility to ensure smooth supply of the essential commodities and services,” Mamata said after a review meeting at Nabanna. 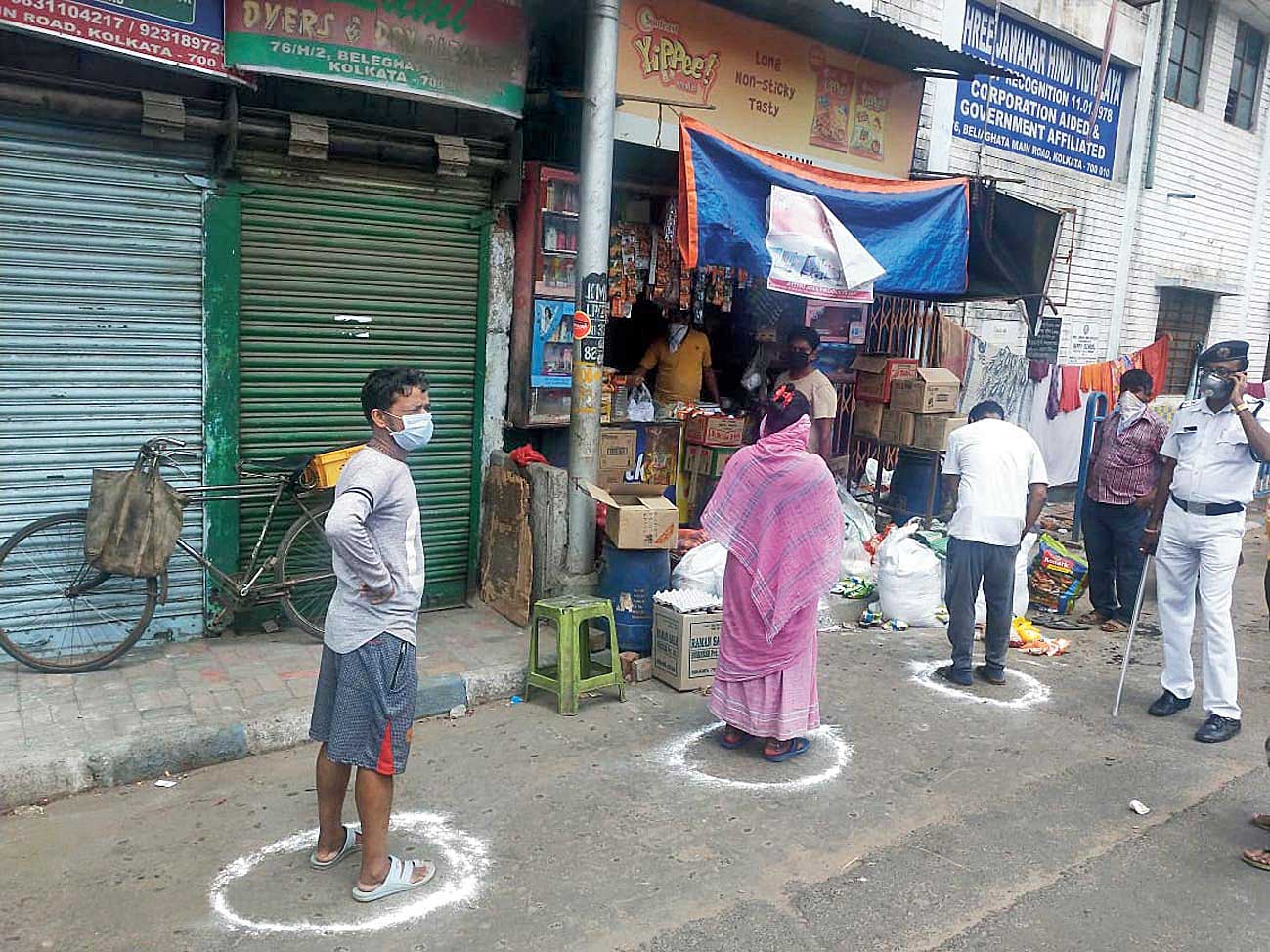 People stand inside circles in a queue in front of a medicine shop in Beleghata on Wednesday. The circles were drawn by police to ensure social distancing.
Picture courtesy Calcutta police

Some of the instructions of the chief minister:

⚫ Passes issued for essential services should be valid across the state and there will be no district-specific passes.

⚫ Farmers should not be blocked if they want to carry their produce to the markets. They should also not be prevented from working in the fields.

⚫ Print and electronic media personnel as well as those associated with the delivery of newspapers will be allowed unrestricted movement on production of identity cards duly issued by the employers.

⚫ Transport facilities would be introduced for emergency services personnel like doctors, nurses and healthcare workers from their workplaces to their homes.

⚫ Ration shops should be kept open to ensure that there is no food scarcity. The food and supplies department can consider supplying one month’s rations at one go.

⚫ Beneficiaries of social pension schemes like old-age pension or widow pension should be given two months’ pension in April.

⚫ The public health engineering department should be ready with packaged drinking water to supply in case of any urgent requirement.

Sources said the chief minister gave the instructions to officials after complaints that the local administration had prevented the movement of several essential services providers.

“This happens when one does not apply his or her mind. I want to ensure that supply of essential items remains uninterrupted,” said the chief minister.

The sources said that as the police were clamping down, regardless of whether a vehicle was carrying essential services providers or not, several e-commerce portals had stopped functioning in Calcutta.

All you need to know about home quaratine

“If people get supply of essential items in their homes, they would not queue up in front of shops or markets. This would help the government achieve the target of social distancing during the lockdown,” said a senior official.

The chief minister urged the people to avoid gatherings in markets and at shops as ground reports suggested that the lockdown had started producing the desired results.

“We did not record the rush of suspected cases in hospitals in the districts in the past three days. It is still early to say but it appears that if we can maintain the lockdown for a few more days, we would be able to control the rapid spread of the virus, which states like Maharashtra and Kerala recorded,” said a senior bureaucrat.

Encouraged by the ground reports, the chief minister said the state government might consider some relaxations after March 31.

“The Centre has announced the lockdown under the Disaster Management Act, 2005. The act was used for the first time in the country. Every state has to obey the notification. Still, the state can give some relaxations, which we will consider on March 31,” Mamata said.

Sources in Nabanna said the chief minister actually wanted to keep the morale of people high by saying that they needed to maintain social distancing for a few more days.

“The state can give some relaxations on essential services and supplies. But the guidelines issued by the Centre make it clear that no large-scale relaxation is possible before April 14,” said a source.