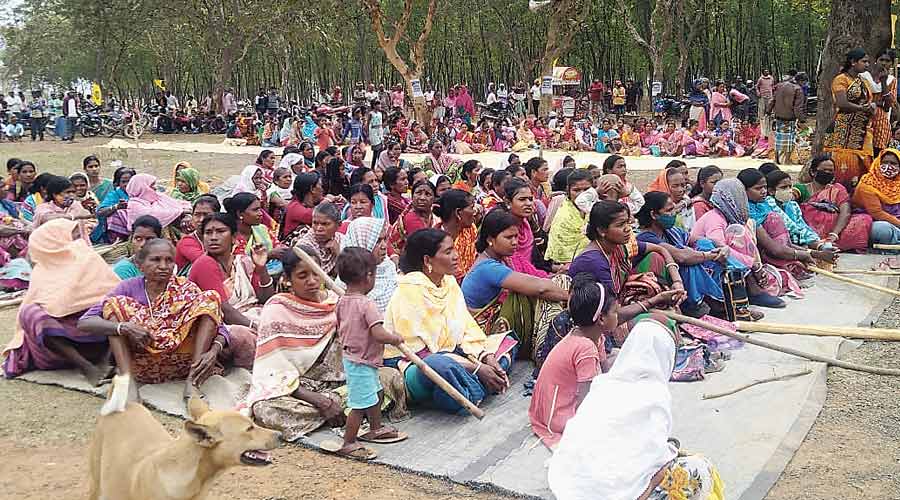 The state government will hand over appointment letters of junior constables to 50 land losers of the proposed Deocha-Pachami coal mine project in Birbhum district and distribute cheques as compensation for their land at an event in Nabanna on Wednesday in the presence of the chief minister.

The event at Nabanna apart, the  state is also organising a similar programme in the district with another 150 land losers on Wednesday itself, said Bidhan Ray, the district magistrate.

Both these events are being seen as attempts by the Mamata Banerjee government to send out a message that local people are coming forward to facilitate the project.

“There are protests in the area and some activists have been arrested.... So, the earlier plan of holding a big programme in the core area of the project to distribute job appointment letters and compensation cheques has been modified. The government is keen on sending out a message that there are people willing to part with their land, and will start with these two events on Wednesday,” said a senior state government official.

On Monday, the Mamata government sweetened the rehabilitation package with more money and better facilities to ensure that more people come forward for the project.

Officials said the decision to provide appointment letters and cheques at the earliest to willing land losers was taken at a high-level meeting at the state secretariat in the presence of Parambrata Chattopadhyay and Tanmoy Ghosh, the chairman and convener, respectively, of an apex committee that the government had set up to ensure consent for the project.

A source present at the meeting said that the members of the committee felt providing jobs and compensation in advance will help the administration win the trust of the local people at the site, some of whom are protesting against the project.

“No one has been parted from their land so far, but the government is providing them jobs and money immediately. This is to send a message that the rehabilitation package is not a bluff and that the government is actually keen to give it,” another official said.

As part of preparations for Wednesday's programmes at Nabanna and the district, around 200 land losers were asked to turn up at district headquarters at Suri.

The verification process went off without a hitch, said sources.

Sources said that the government is trying to bring the situation under control after the recent arrests of nine persons opposed to the project, including Left-leaning economist Prasenjit Bose. The arrests have resulted in a fresh round of protests with local people shutting down several stone mines and crushing units. On Tuesday, a large number of tribal people, mostly women, took out protest rallies demanding the release of the arrested persons.