Vehicles crawled on airport-bound and Ultadanga-bound roads as a 2.5km-long stretch of the artery was flooded, following the downpour since Wednesday night 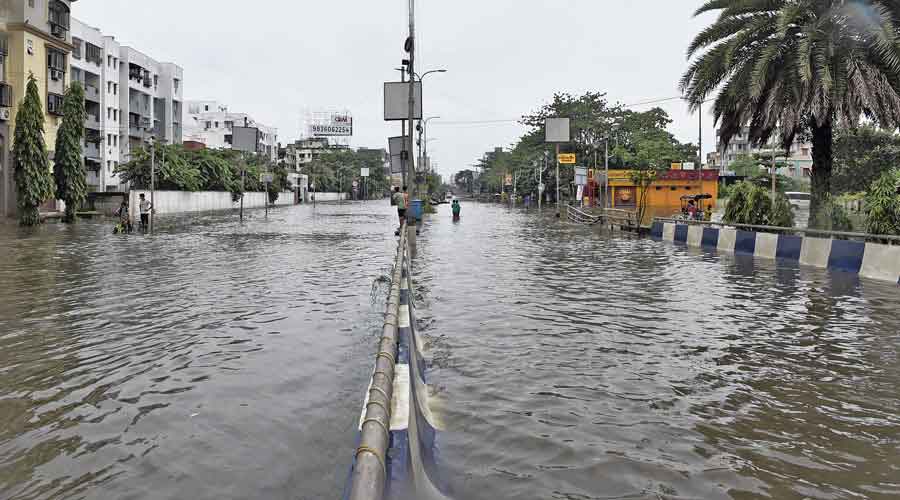 Stretches of VIP Road and large parts of New Town were under knee-deep water till Friday evening, triggering massive traffic snarls that led to more than 100 people missing their flights.

Vehicles crawled on the airport-bound and the Ultadanga-bound flanks of VIP Road as a 2.5km-long stretch of the artery was flooded, following the downpour since Wednesday night.

Airport officials said they had received calls from nearly 100 fliers who narrated the ordeal to them and requested them to tell airlines to let them board the flights late.

“We could accommodate most of the fliers who reached late on next flights. Many passengers got delayed as VIP Road and Major Arterial Road in New Town were waterlogged,” said an airport official.

A traffic snarl on the Baguiati flyover on VIP Road at noon.
Bishwarup Dutta

All three action areas of the planned township had waterlogged streets on Friday. The parking lots of a number of housing complexes and cooperative societies in New Town as well as off VIP Road were under water.

The 38km-long Bagjola canal, which carries water from Kamarhati to the Bidyadhari river and cuts through parts of Baranagar, Dum Dum, Lake Town and New Town, was to get desilted this year.

“Let alone desilting, even the garbage has not been removed. The entire canal is full of garbage. To add to our worries, rampant dumping of construction materials have completely choked the gully pits,” said Samaresh Das, a member of the New Town Forum and News, an organisation of residents of the township.

A flooded stretch of VIP Road near Haldiram’s around 2pm on Friday.
Bishwarup Dutta

An official of the state irrigation department said the canal was last thoroughly desilted ahead of the monsoon in 2017. “The dredging has started but we have not reached the part that flows through New Town and Lake Town,” the official said.

The worst affected areas in New Town included the blocks nearest to the canal in Action Area I, including AB, BA, BC, BD and BE blocks.

In Action Area II, the road in front of City Centre II as well as the one in front of Shrachi Greenwood Elements remained flooded till late on Friday. Action Area III was badly affected, too, with the main road leading to Sukhobrishti housing complex remaining waterlogged till Friday evening.

“We had to deploy extra pumps to prevent water from entering our basement parking lots,” said Ranjan Basu, the president of the Rosedale Housing Complex Flat Owners’ Association.

An official of New Town Kolkata Development Auth-ority said the water from both canals had started overflowing at 9.30pm on Thursday.

On VIP Road, residents of complexes like Poddar Vihar, Space Circle and others said they had a harrowing time even crossing the road. "The road in front of our complex is under knee-deep water," said Manoj Sharma, a resident of Poddar Vihar.

A resident of Koyla Vihar said they had to take their cars out of their parking lot and park them in front of Haj House on VIP Road.