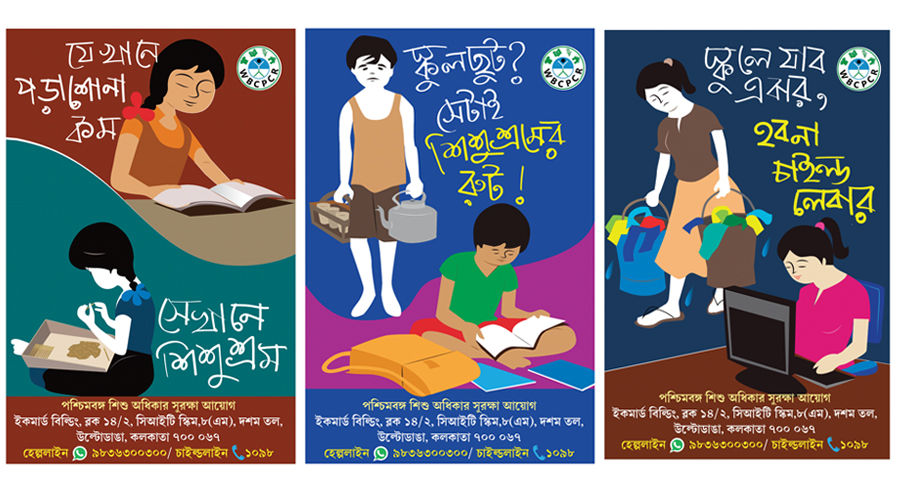 The state commission for protection of child rights released three posters as part of a sensitisation programme against child labour on Thursday.

The posters were released at Shramik Mela 2021 at Ramlila Maidan. The fair, a two-day affair, is being organised by the labour department of the state government.

This comes at a time when chances of children dropping  out of schools and looking for work is high because of the hardships posed by the pandemic.

The posters depict contrasting images of a child as a labourer and another as a student, with a line in Bengali to drive home the message against child labour.

One of the three posters says: “School chhut? Shetai shishu shrom er route! (School dropout? That is the route to child labour!)”.

Commission officials said that given the present conditions, the need for such awareness campaigns is more than ever.

“Schools are closed for the pandemic for almost a year now and we do not know when they will reopen. We feel there is a strong possibility of dropouts. In poor families children will be sent to work and we want to discourage that,” said Ananya Chatterjee Chakraborti, chairperson, West Bengal Commission for Protection of Child Rights.

Chatterjee Chakraborti called for intervention to stop children from being prevented from going to school.

The posters have been sent to Calcutta police and the directorate of child rights and trafficking. The posters will also be put up at traffic signals and kiosks, said Yashabanti Sreemany, a member of the commission.

She said that there were many families where children were first-generation learners and efforts should be made to enable the children to complete their studies.

“After a child gets educated, the family realises that he/she is an asset and not a liability,” Sreemany said. Awareness among such families is not enough, society as a whole needs to realise the problem, she said.

“It has to be a joint effort and if anyone sees a child labourer, they need to speak up,” Sreemany said.