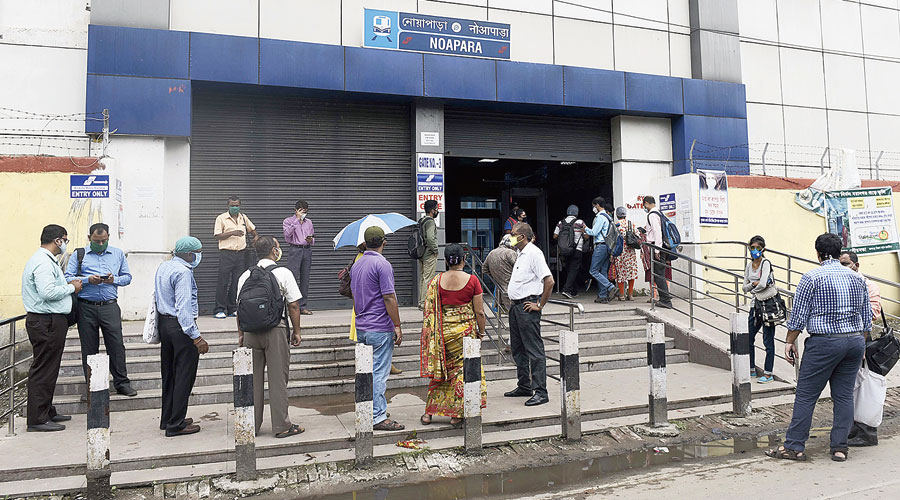 Noapara has emerged among the top three busiest Metro stations, a week into the resumption of commercial services.

The passenger volume of Metro has been way lower than what officials had expected. But the terminal station in the north is on a par with stations like Rabindra Sadan and Esplanade that usually trail Dum Dum in terms of passenger volume, a Metro official said (see chart).

The diversions in the absence of the Tallah bridge and the closure of Dunlop bridge for repairs has led to long snarls on BT Road. Thousands of officegoers from Dunlop, Bonhooghly, Belghoria, Bally, Dakshineswar and other areas on the city’s northern outskirts, who used to reach the city by bus via BT Road, are now opting for the Metro from Noapara.

Before the pandemic, the average daily footfall at Noapara was 10,000. It was then not counted as a busy station on the Metro route that saw more than 600,000 passengers every day.

Since the resumption of services, the station’s share in the total passenger volume has been on the higher side.

The number of e-passes downloaded for Noapara station has been on the higher side. “At least 3,550 passes were booked on Monday, 2,800 on Saturday and 3,000 on Friday,” an official of the agency that has developed the e-pass technology said.

A colour-coded e-pass is now mandatory to enter a station and a smart card is needed to travel on a train. Since September 14, when commercial services resumed, there has been a gap between the number of passes booked and the trips made.

Around 10am on Tuesday, scores of people were seen waiting on the Noapara platform. A train that started from the station had most seats occupied. Many who boarded the train at Dum Dum had to stand because most seats were occupied.

Every alternate seat is now marked with a cross to ensure passengers follow distancing rules. 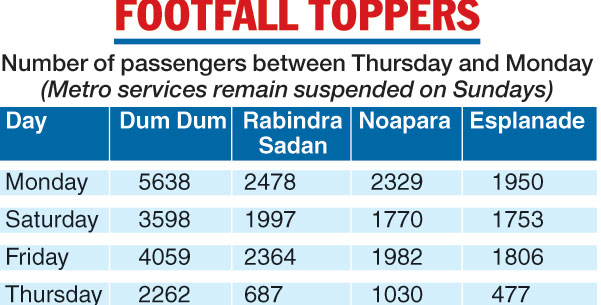 Outside Noapara station, there were more than 30 people waiting in a queue to enter the station around 10.40am. Autos were parked on one side of the road and Tata Magics on the other.

The roads leading to the station are narrow. The Noapara bus stand is around a kilometre from the station. Autos and small vehicles such as Tata Magics are the only public transport options for people travelling to and from the station.

Autos usually ply between Dunlop, Bonhooghly and Noapara and the Tata Magics between Noapara and Rajchandrapur via Bally and Dakshineswar.

Autos take the road along the Bagjola canal to ferry commuters between Noapara station and Dunlop and Bonhooghly. The road has seen some patchwork repairs.

“The suspension of Metro services had crippled our livelihood. Now that trains have started running, we can earn something,” Sukanta Saha, the secretary of the auto drivers’ union on the Noapara-Dunlop route. At least 100 autos ply on the route, Saha said.

Saurabh Ghosh, a Belghoria resident, said he was relieved that Metro services had resumed.

Ghosh repairs medical and surgical instruments and has to visit private hospitals off the Bypass almost every day. When the Metro was suspended, he used to take a bus to Ultadanga and then another to Garia, he said. The journey took him more than two hours every day.

“On a Metro, it takes an hour to reach New Garia from Noapara. The journey is more comfortable, too,” Ghosh said.