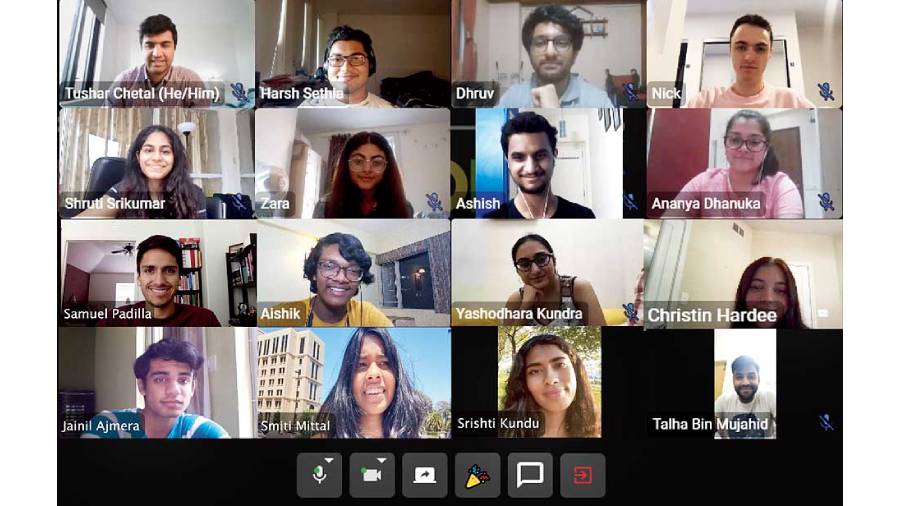 A virtual meeting of the Brooks Brainery core team underway
Sourced by the correspondent
Sudeshna Banerjee   |   Salt Lake   |   Published 18.06.21, 04:06 AM

While most Class X passouts are busy getting the hang of their Class XI syllabus as schools resume classes, Aishik Biswas is putting the final touches to the online summer workshop he is co-ordinating called Brooks Brainery that kicks off on Friday.

“Brooks Brainery is a student-led global edtech organisation we founded that aims to provide free educational opportunities to high-schoolers. Such programmes are hosted every summer by all Ivy League and other universities across the globe. Due to Covid, they have been happening online since last summer. Participation in such four-week non-credit programmes range from Rs 4-6 lakh, with an average virtual class size of 100-200 students,” says Aishik, a resident of Sunrise Point in Action Area IIC.

Last year in summer, Aishik wanted to attend a summer school programme in the United States on his preferred fields of higher studies, neuroscience and psychology, while getting ready for college. “But most of them were very expensive and the fully-funded ones were too selective. So I had to miss out.”

He did eventually attend a winter camp, organised by a group of Stanford University students called South Asian Winter Camp, taking two courses on behavioural economics and on evolution. “They were twice-a-week classes lasting three weeks. Thankfully they were free. My two instructors were students of Ashoka University and University of California, Los Angeles.”

The experience taught him the benefits of attending such camps and gave him the confidence to organise one himself. “I wanted to pass on the benefits to other high schoolers. The camp I attended had students from only our neighbouring countries. But I wanted a more global feel.”

Initially he was worried whether college students would agree to volunteer. The ball was set rolling when he mooted the proposal to a student of Northeastern University, Boston, whom he had befriended at a virtual fair. The third year collegian put up an Instagram post which gained traction among his peers.

Now the camp has 25 course instructors who are current students or recent graduates from top schools, including Stanford, Yale, UC Berkeley, Carnegie Mellon, Johns Hopkins, University of Toronto, UW-Madison and Georgia Tech. Students have registered from 18 countries. “We can accommodate 1,000 students. One can sign up for a maximum of two courses.”

The four-week programme would run from June 18 till mid-July over the weekends.

The themes for the 25 courses range from the sciences to business to liberal arts. “Class sizes would not exceed 20 to ensure that students can properly interact with their instructors,” promises Aishik.

The most popular course so far has been Introduction to Business, with 60-plus registrations. All the courses have been designed by the instructors offering them, who have mostly worked as teaching assistants in their respective colleges.

He agrees that not much bonding among participants would be possible in virtual classes but they have plans for occasions over the weekdays, like moderated ice-breaker sessions in Zoom breakout rooms with topics like Hollywood movies, music etc. “The participants might end up exchanging Whatsapp numbers, form groups and do projects together,” he says.

Brooks Brainery has a team of 15-20 active members spread over India, US and Singapore. “Our graphic designer is from Ukraine.”

Aishik, who has just started Class XI at Salt Lake School, is not joining any course himself but says he has learnt a lot by being involved in devising the two courses in his area of interest — Introduction to Psychology and Famous Experiments in Psychology. The second course is being offered by another Calcuttan, Yashodhara Kundra, a recent graduate of Beloit College, Wisconsin.

The Brooks Brainery team can be reached at www.brooksbrainery.com

Course topics at a glance

A sample of the 25 courses offered by Brooks Brainery:

• Cryptography: Then and Now

• Introduction to Machine Learning with Python

•The Politics behind Crisis Management

•Famous Experiments in Psychology and What They Taught Us