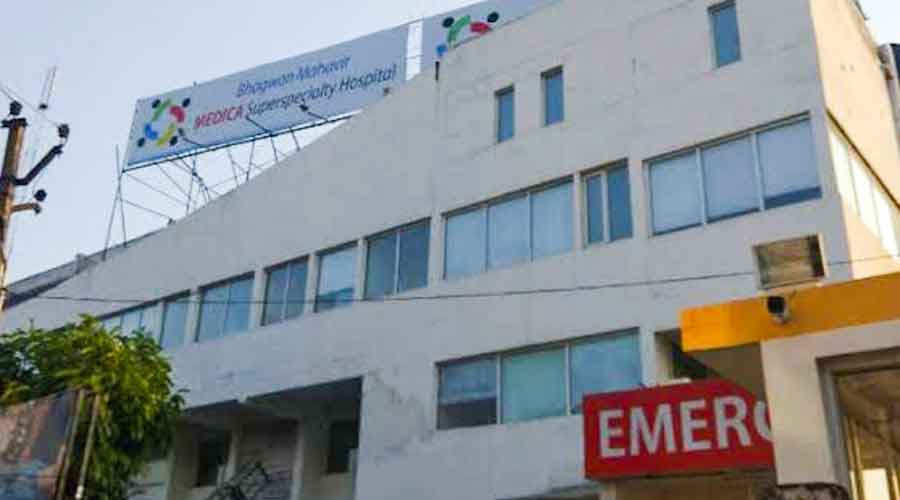 The West Bengal Clinical Establishment Regulatory Commission on Wednesday said Medica’s action was a “blatant violation of the advisory issued by the commission on August 1, 2020”.
File picture
Subhajoy Roy   |   Calcutta   |   Published 12.11.20, 01:46 AM

Medica Superspecialty Hospital has been asked by the state health regulator to spend Rs 10 lakh to feed poor children after it found the hospital guilty of charging more than the price capped for sanitisation.

The West Bengal Clinical Establishment Regulatory Commission on Wednesday said Medica’s action was a “blatant violation of the advisory issued by the commission on August 1, 2020”.

The money has to be deposited with Lady Brabourne College within a month, retired judge Ashim Banerjee, the commission’s chairperson, said. The children will be identified from among those living close to the college, he said.

“The order is meant to send a strong message to all clinical establishments that they cannot violate the commission’s advisories and charge more from patients. If required we will have to penalise them,” Banerjee said.

The order against Medica has not been termed “a penalty”, though, he said.

A retired state government employee lodged a complaint with the commission that the hospital had charged his wife and him Rs 250 each as sanitisation charges when they visited the hospital’s OPD to meet a doctor on October 15, Banerjee said.

The commission’s order said the advisory it had issued on August 1 said patients visiting OPDs have to “pay Rs 50 as sanitation charge, Rs 50 for companion charge, and another Rs 50 in case a physician examines him/her in a PPE gown”.

Amitava Chakraborty, the complainant, who lives in Dhakuria, had pointed out to members of the hospital staff that they could charge him only Rs 50 according to the commission’s advisory. But they did not listen to him.

“He was asked to talk to higher officials of the hospital who, too, said that Rs 250 would be charged. Chakraborty told them that he knew the clinical establishment commission had capped the sanitisation charge at Rs 50,” Banerjee said.

The couple were forced to pay “Rs 500 for infection control charges for two patients”, the commission said in its order. “They were forced to pay the money because they had to meet the doctor. Chakraborty wrote a complaint to us the same day he visited the hospital. He came back home and lodged the complaint,” Banerjee said.

“It is a fit and proper case where we should impose a heavy penalty on the CE (clinical establishment). However, we refrain from doing so. We direct the CE to fund a benevolent project for Rs 10 lakh as and by way of CSR attracting appropriate tax benefit,” the commission said in its order.

Alok Roy, the chairperson of Medica Superspecialty Hospital, said the hospital would spend the money. “We will comply with the order because this is for a good cause,” he said. “This happened because of some error on part of our employees. We have told the commission that we will check our system and find out if a similar error had happened with other patients. We will refund all of them the extra money that has been taken. We do not overcharge any of our patients.”

The commission set up a three-member team, comprising Siuli Sarkar, the principal of Lady Brabourne College, Maitrayee Banerjee, a consultant biochemist and member of the commission, and Barnali Ghosh, a paediatrician with the Institute of Child Health at Park Circus.

“They will be at liberty to involve students and teachers of Lady Brabourne College for the project,” Banerjee said.