Calcutta protester: Why not Mann ki Baat at Singhu border? 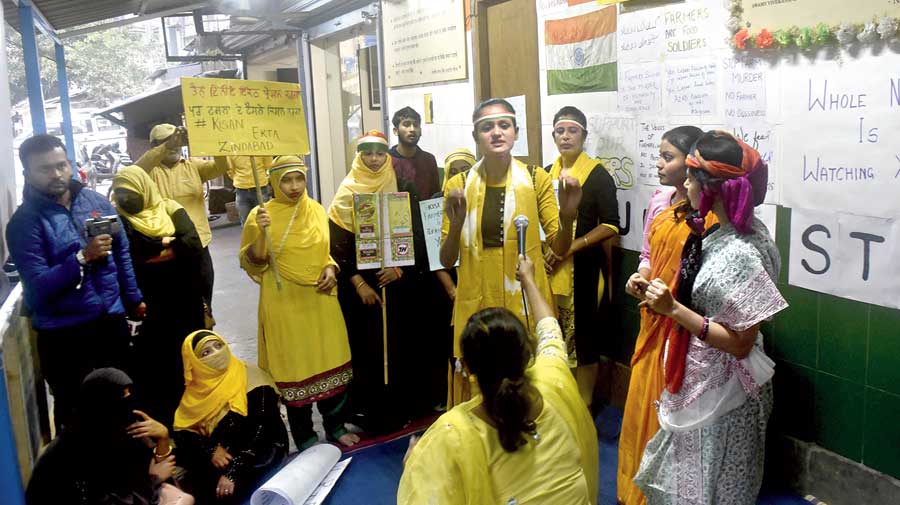 Narendra Modi should have held Mann ki Baat at Singhu border if farmers’ concerns were genuinely on his mind, a protester at a south Calcutta demonstration against the contentious farm laws said on Monday.

The other members of the huddle echoed him vigorously. “Singhu border is barely a few kilometres from his home in Delhi. What is stopping him from going there,” asked Manjit Singh, one of the organisers of the demonstration that entered its sixteenth day on Monday.

A relay hunger strike from 10am to 5.30pm, led by women, is part of the demonstration, apart from speeches, songs and skits.

Monday was dedicated to women, in keeping to a call given by the Jai Kisan Andolan to celebrate the role of women farmers in the country.

“They are wondering why women are protesting at Singhu, at Tikri and other places. Women are protesting because they are an integral part of farming — right from sowing the seeds to harvesting the crop,” said Ramanprit Kaur Sodhi, a social worker who lives in Bhowanipore and has been a part of the Sarat Bose Road protest from the start.

Items like potato and cereals were removed from the list of essential commodities to allow big companies to hoard and then sell them at a higher price, said Nausheen Baba Khan, another organiser.

Cereals, pulses, oilseeds, edible oils, onion and potatoes were removed from the list of essential commodities in The Essential Commodities (Amendment) Act, 2020, that was passed by Parliament on September 22.

“The law will increase the price of everyday items in the kitchen. People are still reeling under the financial burden of the lockdown. The wounds of demonetisation are not forgotten. The government has now come up with other tools of harassment,” Khan told the audience.

A group of women staged a short play on Monday. It began with one of them working on a farmland. She is seen waiting for “acchhe din” and “Rs 15 lakh”. Her path crosses with that of two other women who are headed to the Singhu border to take part in the farmers’ protest. At the end of the play, the first woman joins the other two in heading towards Singhu.

The protesters have occupied a slice of a narrow lane off Sarat Bose Road. On Monday, the site comprised a small stage, carved out of a pavement and a series of plastic chairs on the lane. Posters and banners surround the place.

A protester writes the names of the people fasting on Monday at the Sarat Bose Road venue. A relay hunger strike, led by women, is part of the demonstration.
Bishwarup Dutta

A large banner that contains the names of people who have died at the siege at Delhi border hung at the site. The list contained 57 names. The number has since gone up.

Sarat Bose Road is one of the busiest roads in south Calcutta. A heavy flow of buses, cabs, private cars and two-wheelers went about their business as usual as the protest continued.

eads turned towards the venue occasionally, when a bus of a cab was stuck in a signal. A tea stall right next to the stage, the destination of scores of people for their evening cuppa, brought in some more listeners.

Members of the Sikh community from Dunlop and Barrackpore also visited the Sarat Bose Road venue on Monday.

“The government is scared because we are nearing victory. We cannot let our guard down now. The government will have to repeal the laws,” Sukhvinder Pal Singh, who had come from Dunlop, told the audience amid a loud cheer.