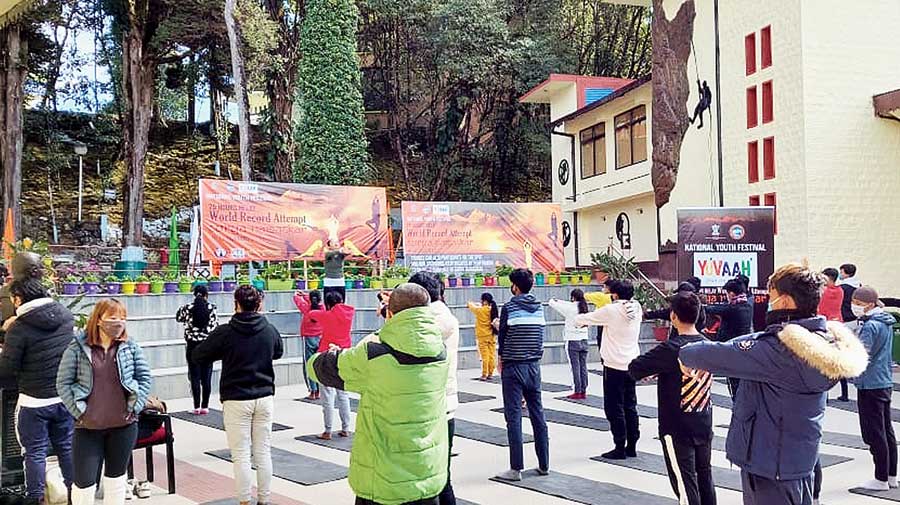 The Himalayan Mountaineering Institute (HMI) is looking at creating a world record by organising a 75-hour relay yoga event involving more than 200 participants to commemorate 75 years of India’s Independence.

Group Captain Jai Kishan, principal, HMI, said such a feat had never been attempted anywhere in the world before.

“I conceived the idea to commemorate 75 years of India’s Independence and also be part of the National Youth Festival which is being organised under the aegis of ministry of youth affairs and sports,” said Group Captain Kishan.

The yoga event will be part of the ongoing youth festival.

Around 200 participants from Darjeeling will perform surya namaskar— a set of 12 yogic postures — from 9am on January 9 till noon of January 12.

Fitness instructors Shraddha Rai and Sikha Rai of Studio 360, Darjeeling, have been conducting selection and training sessions for the participants at the HMI here for the past three days.

Two arenas, one at the auditorium and another outdoors, have been set up for the event. “Even tourists can join in the outdoor arena,” said Group Captain Kishan.

“Besides, people can post pictures of them performing surya namaskar from anywhere in the country and we will provide them with digital certificates,” said Group Captain Kishan.

At any given time, 15 to 20 individuals will be participating in the event through day and night.

Participants will be between 6 to 65 years.

“Taking into account the cold weather, we have made proper heating arrangements at the auditorium” the principal added.