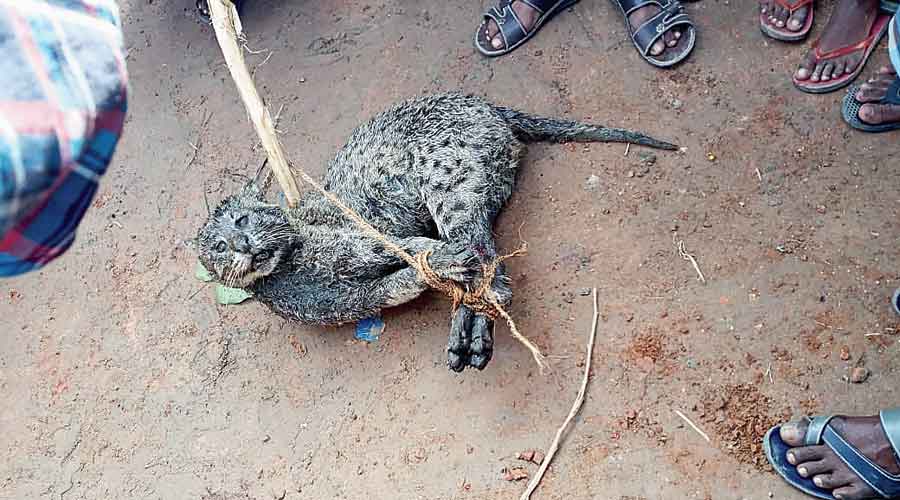 The carcass of the fishing cat, clicked by a resident who shared the picture with an animal rights activist. A team of foresters went to the village but could not find the carcass
Telegraph picture
Debraj Mitra   |   Calcutta   |   Published 28.11.20, 01:35 AM

A fishing cat, Bengal’s state animal, was allegedly beaten to death by some residents of a village in Howrah’s Shyampur block on Thursday.

A snare was laid at Aima village, around 70km from the heart of Calcutta, apparently after some chickens reared by villagers went missing.

“A fishing cat was trapped in the snare late on Thursday. Some villagers beat the animal to death on Thursday and threw the carcass into a pond,” said Subhradip Ghosh, an animal rights activist in Howrah who is associated with multiple wildlife NGOs.

Ghosh said he was alerted by some residents who sent him pictures of the dead animal. “The carcass had been disposed of by the time I reached the spot,” Ghosh said.

Raju Sarkar, the divisional forest officer of Howrah, said a team was sent to the village on Thursday afternoon. “We got information from reliable sources about the killing. But we did not find the carcass or it’s remains at the village. We have started an inquiry and lodged a complaint with Shyampur police station,” he told Metro.

With the latest casualty, at least eight fishing cats have been allegedly killed in different parts of the state since May. Only one arrest has been made so far, according to the forest department.

Conservationists have raised the alarm over the spike in deaths. Fishing cat, baghrol in Bengali and Bengal’s state animal, is included in Schedule I of the Indian Wildlife (Protection) Act, 1972. It is supposed to get the highest conservation priority — akin to tigers and elephants, said animal rights activists. Killing a fishing cat can invite a jail term of three to seven years and/or a fine up to Rs 30,000.

The nocturnal animal thrives in wetlands and feeds mostly on fish. Their numbers have dwindled as wetlands have shrunk and they are forced to enter human settlements and prey on fish farmed in ponds and livestock.

Activists and foresters cited the Covid-19 curbs for the rise in the number of deaths and lack of arrests.

“We used to conduct regular awareness campaigns on fishing cats in several areas. But the pandemic has halted everything. The lack of awareness is the primary reason behind the human-animal conflict,” said a member of the Human Environment and Alliance League (HEAL), an NGO.

The size — a full-grown fishing cat is twice the size of a house cat, weighing over 15kg — and blotches and stripes on its body make many people mistake it for a leopard or a tiger cub. The fear gets stronger if livestock is lifted and people try to kill the animal.

Fishing cat’s meat was sold in some parts of the state — including pockets of Howrah — till a decade ago.

“A sustained campaign by foresters and wildlife enthusiasts stopped that. However, with the pandemic and an absence of strict vigilance, fishing cats are again being killed and their meat eaten,” said Tiasa Adhya, the founder of the Fishing Cat Project, a campaign for research on and conservation of the animal.

On the basis of information compiled from local volunteers and residents, Adhya and her colleagues have traced alleged killings of seven fishing cats since May this year. The deaths were reported from West Midnapore, Howrah, Nadia, Murshidabad and North 24-Parganas.

A wildlife official said FIRs had been lodged in most cases.

“The pandemic has not only affected our work. It has also posed a problem for other agencies we coordinate with,” said V.K. Yadav, the chief wildlife warden of the state. “With things gradually opening up, we will scale up awareness campaigns.”