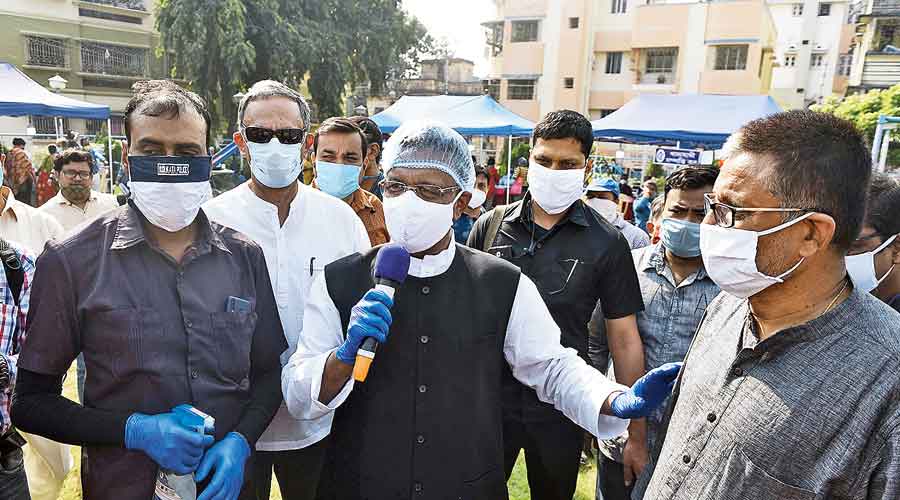 A camp was organised at BD Block in Salt Lake as part of the state government’s outreach programme, Duare Sarkar (government on doorstep), where government officials as well as elected representatives heard grievances of residents.

Apart from hearing out grievances, officials at the inaugural camp of the outreach programme listed at least 11 welfare schemes launched by the state government since 2011.

On Tuesday, more than 50 men and women visited the camp that was held on the first floor of BD Market.

The Telegraph visited the camp to find out what sort of assistance people sought from officials.

Sambhu Das, 46, arrived at the camp around midday and told an official that he needed help regarding a digital ration card for his daughter. According to Das, he and his wife had received the digital cards, but his daughter had been left out.

“Although we three had applied together, my daughter’s card did not come. So I came here and spoke to the officials, who asked me to fill in a form and submit it,” said Das.

BE Block resident Snigdha Bhattacharya, 57, asked about the procedure to apply for the Swasthya Sathi scheme.

She was directed to an official from the health and family welfare department, who told her that a smart card would be issued in the name of the woman who heads the family and details of all family members would be inserted in the card.

Those enrolled in any other government health scheme can’t opt for the Swasthya Sathi scheme.

“The card will be issued in the name of the woman who heads the family. Details of all the other family members will be inserted in the card and all family members can avail themselves of the benefits,” the official said.

The official also explained to Bhattacharya that the scheme has around 1,500 empanelled hospitals, including AIIMS (Delhi) and Christian Medical College (Vellore).

The chairperson of the board of administrators of the Bidhannagar Municipal Corporation, Krishna Chakraborty, and other officials of the civic body, the sub-divisional officer of Bidhannagar and officials from other departments were present at the camp.

A board hung near the entrance explaining different government schemes, including Kanyashree (a cash transfer programme aimed at retaining girls in schools and preventing their early marriage), Khadya Sathi (which aims to ensure food security for 90 per cent of the population) and Sikhashree (a one-time grant to SC and ST students studying in Classes V-VIII to reduce their dropout rates).

At your door: A long queue in Garfa on Tuesday for the state government’s outreach programme, Duare Sarkar (government on doorstep), where officials and elected representatives heard residents’ grievances.
Sanat Kr Sinha

Other schemes include Rupashree (a one-time grant of Rs 25,000 to poor families during their daughter’s marriage), Jai Johar (for betterment of STs), Taposili Bandhu (pension scheme for SCs) and Aikyashree (scholarship programme for students from minority communities).

Chakraborty, of the Bidhannagar civic body, said people had come out in good numbers to tell their grievances as well as to apply for welfare schemes.

“This camp has been quite satisfactory as people turned up in numbers,” said Chakraborty.

The camps will be held in phases. The first phase of the programme will continue till December 11, the second from December 15-24, the third from January 2-12 and the last from January 18-30.