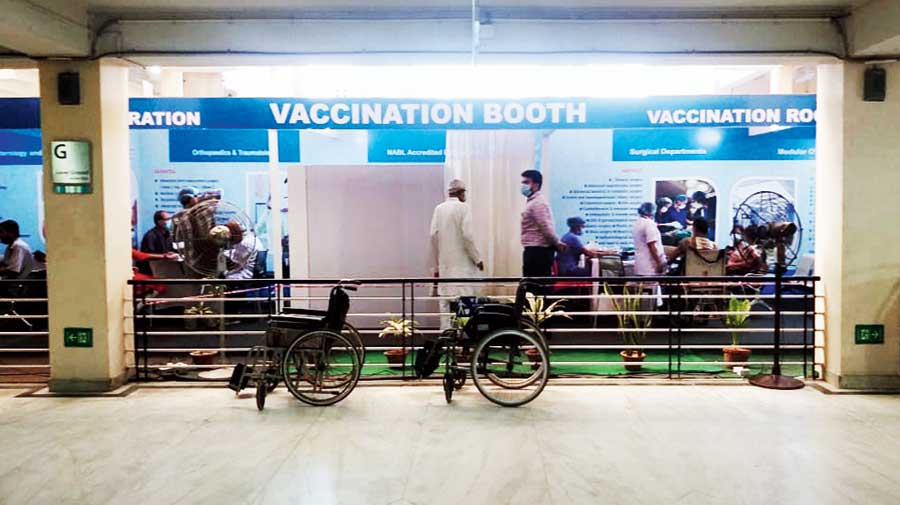 Private hospitals and civic health clinics in Calcutta and Salt Lake are flooded with requests from people above the age of 45 for slots for Covid jabs.

Some hospitals that have been booking slots for a few days said the number of requests had been increasing by the day. An official of a private hospital said 200 people in the “45 and above” category had booked slots for Covid jabs for April 1.

The Centre has announced that anyone who is 45 or above will be eligible for a Covid shot from April 1 (Thursday). Till Wednesday, senior citizens and people between 45 and 59 with comorbidities, apart from medical personnel and frontline workers, were eligible for vaccination against Covid.

“We have already received 200 bookings for April 1. About 40 people have also booked slots for April 2 and 3. A lot of people are calling up our hospital to book slots. Many others are coming to the hospital for appointment,” said Pradip Tondon, the CEO of Belle Vue Clinic.

Officials in several other hospitals like Peerless, AMRI and the RN Tagore International Institute of Cardiac Sciences (RTIICS) said a large number of people were calling them up or turning up with requests for vaccine slots.

An AMRI official said around 2,200 people were calling them up every day with requests for slots. “Around 42 per cent of the callers are people aged between 45 and 59,” the official said.

At Peerless Hospital, booking of slots for the “45 and above” category started on Tuesday. Sudipta Mitra, the chief executive officer of Peerless, said the number of calls and visits to book appointments was far more than what they had witnessed in the days preceding the onset of vaccination of senior citizens and people between 45 and 59 with comorbidities.

“The rise in the case count has made people realise that the threat from Covid-19 is still not over. Also, the population above 45 is the working population. People in this category are keen to get vaccinated and stay protected. We are expecting a very high turnout from April 1,” said Mitra.

Peerless, which is vaccinating about 200 people a day, has planned to administer jabs to about 500 a day from Thursday. “We can do it if we receive more vials,” he said.

At the RN Tagore hospital, 100 people have booked slots for Thursday. Slots have also been booked on all days of the first week of April. The hospital has decided to run vaccination for four more hours every day from Thursday.

“We are vaccinating from 8am to 5pm. We will stretch it till 9pm. We will also run vaccination on Sundays if there is a demand. We are doubling the number of registration and document verification counters,” said R. Venkatesh, regional head (east), Narayana Health, which owns the RN Tagore hospital.

The Calcutta Municipal Corporation (CMC), too, will increase its vaccination centres from Thursday. “We are administering shots at 69 ward health clinics. From Thursday, that will go up to 80. On Saturdays, vaccination will continue till 4pm, instead of 1pm,” a CMC official said.

The Covid-19 vaccine clinics run by the Bidhannagar Municipal Corporation as well as the New Town Kolkata Development Authority (NKDA) in New Town will set up help desks where people who are above 45 can register for the shots.

The NKDA is running two vaccine sites — one at the CB block community market and the other in Action Area III, opposite the Greenfield Heights housing complex. Those who want to get their shots can register their names by calling up the New Town helpline at 18001037652, an NKDA official said.

“A lot of people have registered for getting the shots through the helpline,” said Sen.

At the clinics run by the Bidhannagar Municipal Corporation in Salt Lake, Narayanpur, Ashwininagar, Rajarhat and other areas have planned to operate help desks that will allow people to register for their shots.

The NKDA vaccination centres and the ones run by the Bidhannagar Municipal Corporation will operate from 9am to 4pm.

Salt Lake Sub-divisional Hospital will take a call whether to allow spot registration at a meeting that will be held on Wednesday, an official of the hospital said.