233 new beds have been laid out after state govt approached AMRI, which now has VGo robots to attend infected patients 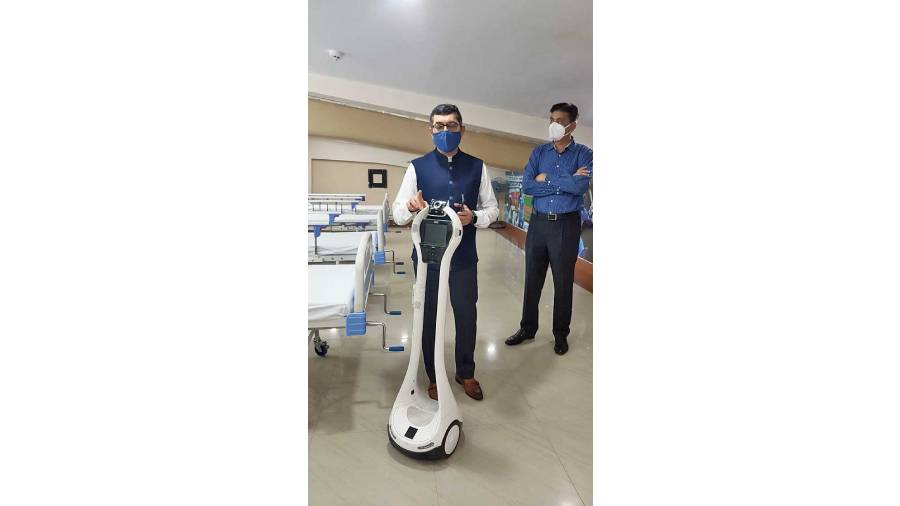 To save time and enforce social distancing, AMRI Hospitals have got little robots to move from bed to bed and through their webcam, allow doctors to interact with patients without physically having to go over every time.

The robots have come into use at AMRI Hospitals during the pandemic and are part of the “crew” appointed at the new field hospital inaugurated at Salt Lake stadium on May 7.

“These VGo robots have been introduced especially for the pandemic. Their no-touch programming allows doctors to feed instructions over the phone,” explained AMRI Hospitals group CEO Rupak Barua. “The robots are fitted with wheels and as per instructions, will visit the beds assigned. The webcam on top will connect the patient to the doctor, whose face will be seen and voice heard over a screen fitted in the robot.”

The VGo robots are imported from the US, although the manufacturer is based out of Massachusetts. The stadium wing of the hospital will have one such robot at work.

The 233 new beds at the stadium have been laid out after the state government approached AMRI with the proposal. “Initially we thought of turning these beds into a satellite centre but judging from the desperate situation around, we felt a field hospital was more needed,” said the CEO. “The infrastructure was set up in five to 10 days.”

While the hospitals have so long been catering to only the severest of cases, two satellite centres were set up for mild or asymptomatic cases. So Monotel, in Sector V, and Hotel The Sojourn, opposite to the stadium, together have 91 beds. The annexe building of AMRI Salt Lake, which is the Covid wing, has 83 beds.

The field hospital at the stadium is for patients who may not be so critical as to need hospitalisation but are still suffering. “Thus far we simply could not admit this category of patients but now, doctors and nurses will monitor them, oxygen will be available and in case their condition deteriorates or they need ventilators, patients will be transferred to the hospital across the road,” said Barua.

Dr Susruta Bandyopadhyay, head, critical care, AMRI Salt Lake, added that the stadium beds have piped oxygen. “Cylinders are a crude way of providing oxygen, where one is constantly worried about the refilling. Piped oxygen comes from a centralised unit and is a more advanced system.”

Bandyopadhyay estimates that for every patient admitted at the hospital, there would be five here at the stadium’s field hospital.

Surajit Roy, CEO of the stadium, said they had handed over 28 dormitories to AMRI. “Our hospitals are under so much stress that we were ready to help in any way we could,” he said, adding that Kishore Bharti stadium in Santoshpur had also been give to Medica Superspecialty Hospital to start a satellite facility.

The dorms have been turned into male and female wards, single and double rooms and a four-bedded respiratory care unit. Many rooms do not look like typical hospital cabins. Some are much longer than they are wide, with space for two beds on either side of the walkway. Some rooms have pictures of icons like Sania Mirza and Mary Kom plastered over walls, meant to inspire the sportspeople who used to stay here before the pandemic.

There are also rooms for doctors, nurses and back office work like handling admission and discharge. “To be admitted here, however, the patient has to head to the emergency section of AMRI Hospital across the street. The doctors there will assess the severity of the case and decide whether the patient needs the hospital, the satellite centre or the field hospital here,” said Barua.

The officials would not comment on the rates but said the stadium beds would be roughly half of those inside the hospital. “We are planning to open another field hospital at Netaji Indoor Stadium with 200 beds and a satellite facility at The LaLiT Great Eastern Kolkata with nearly 200 more beds.”

AMRI’s vaccination centre has also got shifted out of the hospital and into the stadium, in keeping with government regulations.