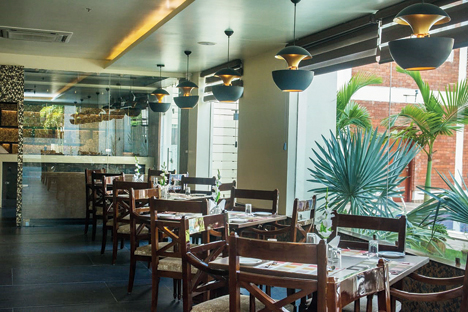 Several people tired of confinement at their homes took their tables on their “first outing” in many days. Some of them, who had gone to the takeaway sections, were surprised to see waiters inviting them inside and sat down for a snack.
Representational file picture
Debraj Mitra, Monalisa Chaudhuri   |   Calcutta   |   Published 05.06.21, 02:20 AM

Some eateries in Calcutta opened their doors to diners at 5pm on Friday even though a formal notification by the state government, formalising a proposed leeway announced by the chief minister, was yet to be issued.

Several people tired of confinement at their homes took their tables on their “first outing” in many days. Some of them, who had gone to the takeaway sections, were surprised to see waiters inviting them inside and sat down for a snack.

But before the crowd picked up, police ordered the eateries shut for diners. The police told the restaurants they could not open for diners until the state government clarified the norms of opening in a notification.

A Park Street confectionery was among the eateries that had opened. Two friends, one from CIT Road and another from Theatre Road, were the first to occupy a table. They saw the chief minister promising the 5pm to 8pm window and said they thought it would be implemented from Friday itself.

“We used to spend almost every weekend here until the new curbs were announced. When we heard about the reopening on Friday, we did not want to give it a miss,” said the Theatre Road resident, who is pursuing her master’s in international trade from a Mumbai institute.

Another man from Maniktala had come to get some savouries packed from the eatery. “I saw waiters arranging tables and asked if they were open.They said yes and we sat down,” said the man.

Across south Calcutta several cafes were open. At least one table was booked at the Woodburn Park outlet of a fast-food chain known for its sandwiches. A café on Purna Das Road was open.

However, many restaurants on Park Street and elsewhere remained shut. Most of them had “only takeaway and online orders” posters shut on the gates.

By 7pm, most of the eateries that had opened for diners shut shop. Police said they were yet to receive any order related to confirmation over opening restaurants to diners between 5pm and 8pm.

“We have not received any order to this effect till now (Friday evening)...,” said joint commissioner (headquarters) Subhankar Sinha Sarkar.

On Thursday, at a meeting with representatives of business chambers and trade bodies, chief minister Mamata Banerjee said: “Eateries and restaurants can remain open between 5pm and 8pm provided the employees are vaccinated.”

A formal notification on the leeway is expected to answer several questions. If being vaccinated means taking two doses, then most restaurateurs will struggle to resume operations.Who will bear the cost of the vaccination is also not clear.

At least one association of restaurateurs has requested the Calcutta Municipal Corporation to arrange for free vaccination for the employees.

“We are bleeding because of the shutdown. Any further cost burden on us would be very difficult to cope with,” said a restaurant owner.