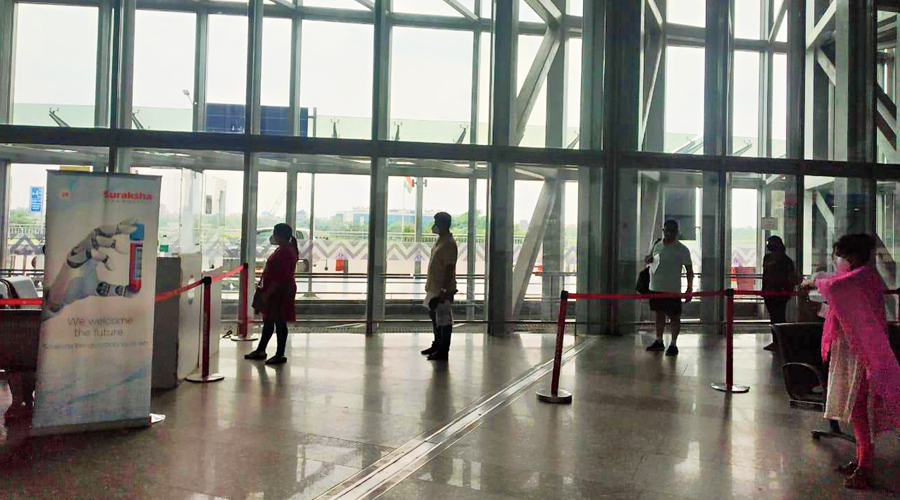 The Covid testing facility at the Calcutta airport has many passengers queuing up every day because very few diagnostic centres in the city are giving test results within 72 hours of sample collection.

The local authorities at many domestic and international destinations have made it mandatory for fliers to have a Covid negative report, obtained not more than 72 hours before, while boarding the flight.

Airport officials said they had asked Suraksha Diagnostics, which conducts the tests, to give the results of those with air tickets within 48 hours.

The facility was started about a month ago and can be accessed through gate number 3C on the departure level, near the airline counters.

“Many passengers were complaining that they had to cancel their tickets because the RT-PCR test reports were not available within 72 hours. So we had decided to set up the testing facility at the airport,” an official of the city airport said on Thursday.

Apart from passengers, residents of nearby localities are queuing up for the test, said officials of Suraksha.

“We are collecting 200 to 250 samples every day for the RT-PCR test at the airport, of which 80 to 100 are of air passengers. The airport authorities and airline officials have requested us to prioritise testing of samples of fliers. We are delivering their reports within 48 hours,” said Niren Kaul, vice-president, operations, Suraksha Diagnostics.

He said samples were collected every day from 10am to 6pm. The standard fee of Rs 950 is charged for the test, he said.

“Passengers from far-off places like Burdwan are coming to get the test done here before departure,” said Kaul.

Passengers flying out of Calcutta to most cities in India and outside the country need an RT-PCR negative report and the test should be done within 72 hours before departure.

Several passengers said they were facing problems in getting test reports within 72 hours of giving samples.

UK national Anumkita De is scheduled to return to the country from Calcutta through Delhi on Air India flights. De, a doctor, is to fly from Calcutta to Delhi on Tuesday evening and then onwards to London on Wednesday morning.

“I had contacted several testing facilities but all of them said they could not guarantee a report within 72 hours. One centre said they were only collecting samples of people with Covid symptoms and were not entertaining air passengers,” said De, who is staying in Tollygunge now. She is planning to go to the airport on Sunday to give the swab samples for the test.

The Telegraph has reported that RT-PCR test reports are often coming four to five days after the collection of samples.

“Now people are only travelling for essential causes. So, these passengers are severely inconvenienced when they have to cancel or defer their travel,” said Anil Punjabi, chairman, east, Travel Agents Federation of India.