Every time a person is tested, the exterior of the gloves and the chair are disinfected so that no one catches infection from the previous person 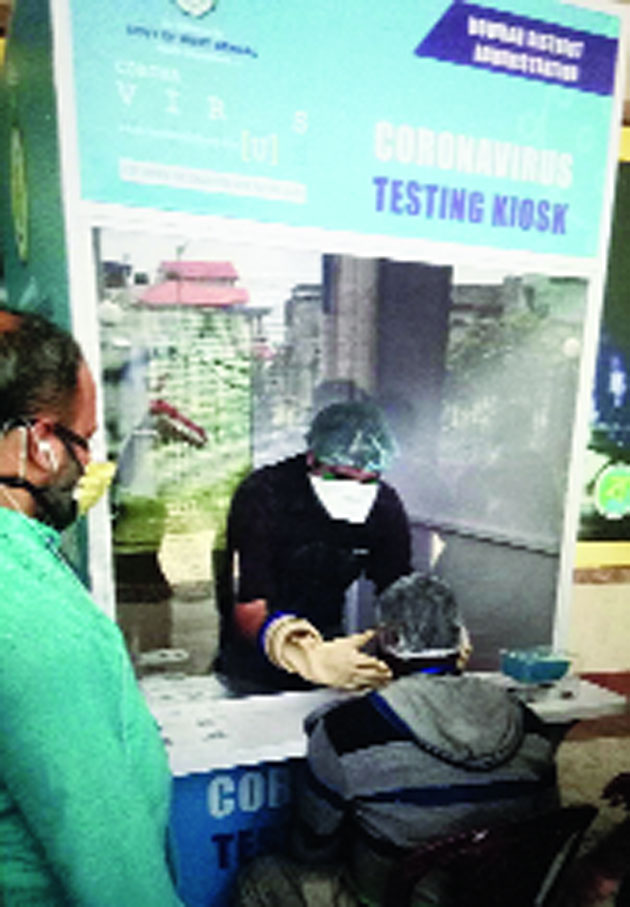 The Howrah district administration has installed a kiosk to collect swab samples for the Covid-19 test at the quarantine centre in the Dumurjala stadium.

At least five such kiosks will start functioning in Howrah city in a couple of days, district administration officials said.

“The Howrah Municipal Corporation will install a kiosk each in its health centres in Shibpur, Salkia, Howrah Maidan and Bally. Another kiosk will be installed at Howrah District Hospital,” an official of the district administration said.

The kiosks, modelled on those set up in South Korea, have a glass shield that separates the medical technologist collecting the sample, who is inside the kiosk, from the person being tested, who is outside.

The technologist does not need to wear personal protective equipment (PPE) because the glass acts as the shield.

A pair of gloves are fitted to the glass of the kiosk. The technologist puts his hands into the gloves and collects the swab samples of the person being tested, who sits on a chair outside.

Every time a person is tested, the exterior of the gloves and the chair are disinfected so that no one catches infection from the previous person.

Dhaval Jain, the additional district magistrate of Howrah, said the kiosks reduced the risk of health workers getting infected while collecting samples.

“The medical technologists feel safe while working from inside the kiosk,” said Jain, who is also commissioner of the Howrah civic body.

Jain said the corporation had adopted the dual strategy of collecting samples from kiosks and also visiting neighbourhoods to collect samples.

“We collected 100 samples from Sanatan Mistry Lane in Golabari on Sunday. Our personnel wore PPE and visited lanes and bylanes to collect samples of contacts or people with symptoms of Covid-19,” he said.

An official said personnel of the corporation conducted an extensive campaign in the locality before the sample collection started on Sunday.