The NGO has supplied rice, pulses, potatoes, soya beans, and sanitiser bottles to the police for distribution among rickshaw-pullers and the elderly 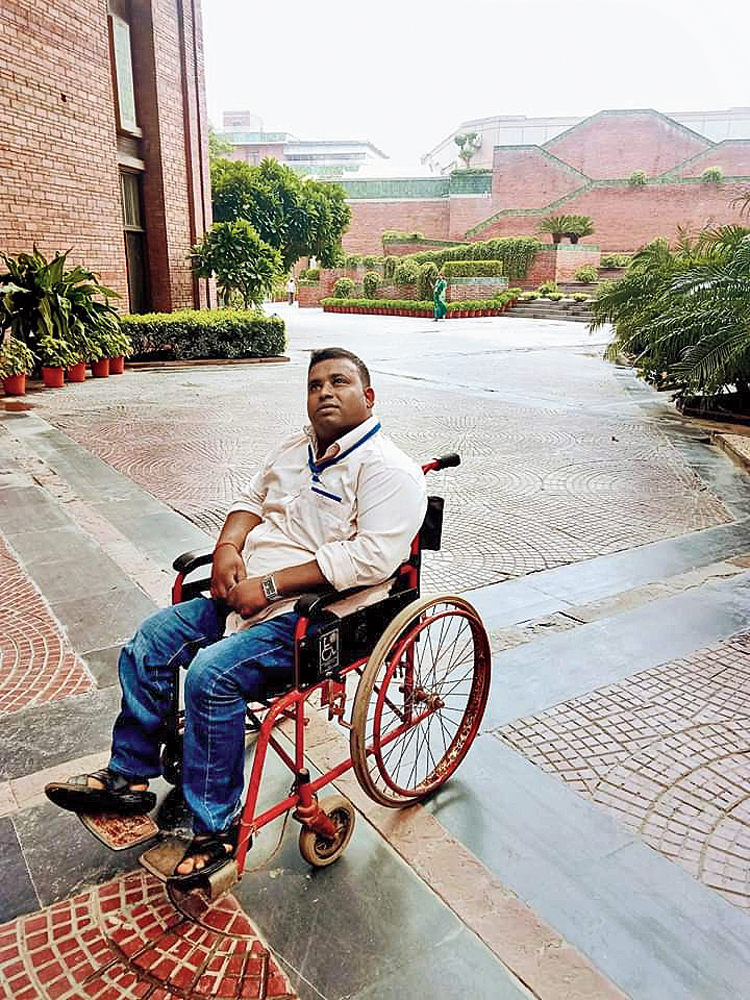 A teacher in a wheelchair has stepped forward to provide the poor with food in Sinthee on the city’s northern outskirts.

The teacher of Bagnan College in Howrah has activated his NGO to deliver essential items to cops at the police station running an initiative to feed the poor during the lockdown. The NGO has supplied rice, pulses, potatoes, soya beans, and sanitiser bottles to the police for distribution among rickshaw-pullers and the elderly.

Bubai Bag — a former Jadavpur University student with Locomotor Disability (restriction in limb movement) — got to know of the police initiative on the university’s community radio, 90.8MHz. “I contacted the teacher, Iman Kalyan Lahiri, overseeing the radio operation so that funds can be shared,” Bag said.

The history teacher, who did his PhD from JU, founded the NGO, Aalo, along with a group of former students of JU and the Indian Association for the Cultivation of Science in 2011 to offer scholarships to poor students.

He and other members of the NGO created a corpus, “Corona Relief Funds”, once the lockdown was announced. “This pandemic has made the lives of the poor more difficult. When I heard about the police initiative to help rickshaw-pullers with food, I told our members that we should chip in from our funds,” Bag said.

Prabir Chandra Mandal, the additional OC of Sinthee police station, said cops had been providing 200 people, including rickshaw-pullers, with food since late March. Rickshaw-pullers are now without jobs in the absence of people on roads, the officer said.

“When the college teacher contacted us we asked him to help us with essential items instead of money,” Mandal said.

Cops collected the items through one of the NGO members who lives in Tallah. The items were distributed in the presence of the member in the Sinthee neighbourhood.

“The help from Aalo is a recognition of our efforts,” an officer said.

Cops prepare khichri on the police station premises and distribute it among rickshaw-pullers near Dum Dum Metro station and the Sinthee crossing. They also deliver grocery items to the homes of the elderly.

The coming together of a former JU student and the police station through the JU community radio shows how individuals, institutions and the local administration can make a difference during the pandemic, JU vice-chancellor Suranjan Das said.

The former student and his NGO have contributed to the JU “community kitchen”, which is being run by a group of students and research scholars to feed the poor in south Calcutta.