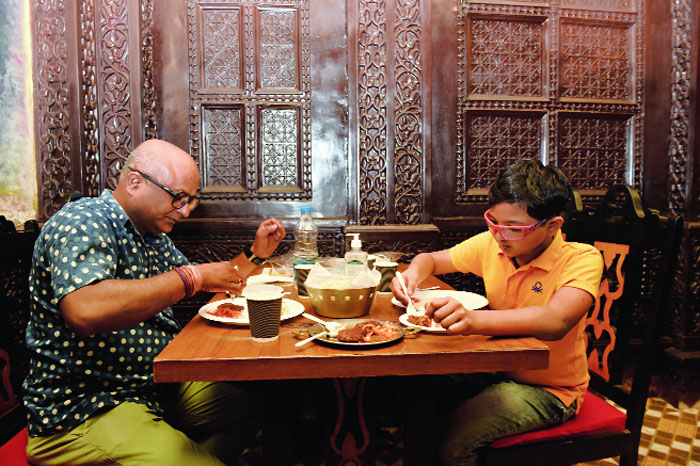 The “leg spinner” was back on a familiar pitch, castling kebabs, parathas and raan biryani.

Vedatman Chakraborty, 14, and his father Subir, 48, became the openers at Oudh 1590, a restaurant behind Vivekananda Park, which had been waiting since noon on Monday for the first diner in 74 days.

The wait ended when the father and son from Ballygunge Phari entered the eatery at 2.25pm.

Oudh 1590 stands right next to a cricket coaching camp where Vedatman, a “leg spinner” and Gublu to his loved ones, would visit thrice a week before the lockdown.

“We would come here frequently, after his practice, for lunch. He was hell-bent on coming here at the first chance after the curbs were lifted,” said Subir Chakraborty, who trades in computers and peripherals.

The camp has been destroyed by Cyclone Amphan.

The remains of a giant shirish tree, uprooted along with a raised concrete platform at its base, was still lying in front of the eatery.

“It is a symbol of the way our lives have toppled. But how long can you remain holed up inside your home. You have to live with the crisis,” Subir told Metro in between placing orders from a disposable menu card.

They ordered a plate of galouti (soft mincemeat) kebabs and parathas. “Biryani khabo na (Are we not having biryani)?” asked Vedatman, rubbing his Spiderman-themed glasses with a tissue.

His father smiled and also ordered a plate of raan biryani, made with meat from the hind legs of a goat. “Ato khete parbi (will you be able to eat all this)?” asked Chakraborty.

“We have ordered food from here during the lockdown. But eating here is much more enjoyable. It is the aroma,” said Vedatman.

The Class VIII student of Indus Valley World School had a series of online classes till late afternoon, after which he came to the restaurant.

He was supposed to go on a cricket tour of the UK this summer, the trip arranged by his Vivekananda Park camp. “Instead of playing in England, he is having to do shadow bowling in the terrace,” said his father.

The father and son were always on the trail of new restaurants in the city. Chakraborty’s wife, who works with a private insurance company, accompanied them occasionally.

But the lockdown has changed everything.

Chakraborty said his business had nose-dived over the past couple of months. “The payments are all held up. Everyone who owes me money has a story of helplessness,” he said.

Two more tables filled up within 15 minutes of the arrival of the first diners. A guard with a thermal gun at the entrance scanned each visitor. Sanitisers, disposable menu cards, plates and cutlery greeted the diners at each table.

A group of three, clad in formals, came to get their food packed. Delivery executives of online food aggregators also kept coming to the eatery to receive orders.

“It is a relief to be back working. The past two months had been very suffocating. We (the staff) would always think about an uncertain future,” said Soumya Chatterjee, the manager of the outlet.