Findings suggested that Aedes Aegypti is most active from 6am to 7am and so we have adjusted our larvaecide-spraying and mosquito-fogging schedules accordingly: Debashis Sen, chairman, NDITA 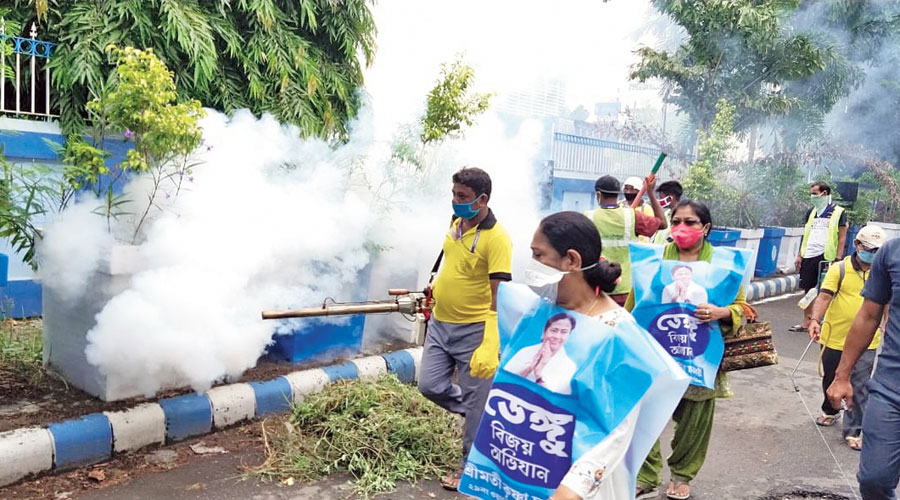 Mayor Krishna Chakraborty oversees the fogging of a footpath in Salt Lake on Sunday
Telegraph picture
Snehal Sengupta   |   Published 25.09.20, 02:13 AM

The Sector V authorities are running a pilot project with a machine that will determine the kind of mosquitoes swarming the area.

“The machine has been developed by a start-up and attracts mosquitoes using lactic acid. It can determine the breed of the mosquito by counting its wing-flapping rate,” explained Debashis Sen, chairman Nabadiganta Industrial Township Authority (NDITA) on Sunday.

“The findings have suggested that the dengue-causing Aedes Aegypti is most active from a time period of 6am to 7am and so we have adjusted our larvaecide-spraying and mosquito-fogging schedules accordingly,” said Sen.

The Salt Lake, Sector V and New Town authorities carried out a number of dengue eradication measures and awareness programmes on the day as part of the state-wide “Dengue Vijay Abhijan”.

NDITA has also chalked out a map using footage from drones to mark potentially vulnerable areas in Sector V as breeding grounds for mosquitoes. “We have mapped the entire township and have identified the problem areas,” said an official. “As very few people are going to the offices now there has been a let-down in the cleaning of highrise buildings and we have noticed water accumulation on roofs and other places. We have notified the building authorities and asked them to clean up from time to time.”

In New Town, too, teams from the New Town Kolkata Development Authority (NKDA) cleaned up vacant plots of bushes and garbage and sprayed larvaecide over a span of two days. Sen, who is also the NKDA chairman, said that in New Town a team of officials meet regularly in the Covid-19 war room where mosquito eradication progress reports are also discussed.

“From discussing the best and effective chemicals to using the latest technology that can help ease the work of vector control teams, we are always concerned about dengue. Even during the pandemic we have not let our guard down,” said Sen.

According to him, regular spraying of larvaecide and fogging is being done. Guppy fish have also been released in several New Town waterbodies that are close to housing complexes and offices.

Mayor of the Bidhannagar Municipal Corporation, Krishna Chakraborty led a rally from her ward to the Nagarayan building near the Karunamoyee crossing.

The rally included vector control teams of the corporation which sprayed larvaecide on the roads. The teams also cut down and burnt bushes in a vacant plot of land beside the HSBC building that is used as a parking lot during the fairs held at the Central Park fairground.

Chakraborty said that they carry out mosquito eradication programmes throughout the year and had taken out the rally to spread awareness among the residents of the township. “Dengue is under control in Salt Lake. There are no cases reported here as of now. We organised this event both to raise awareness and raise the morale of our field workers and vector control teams who work tirelessly to ensure that the mosquitoes do not breed,” said Chakraborty.