Calcuttans march in solidarity with farmers 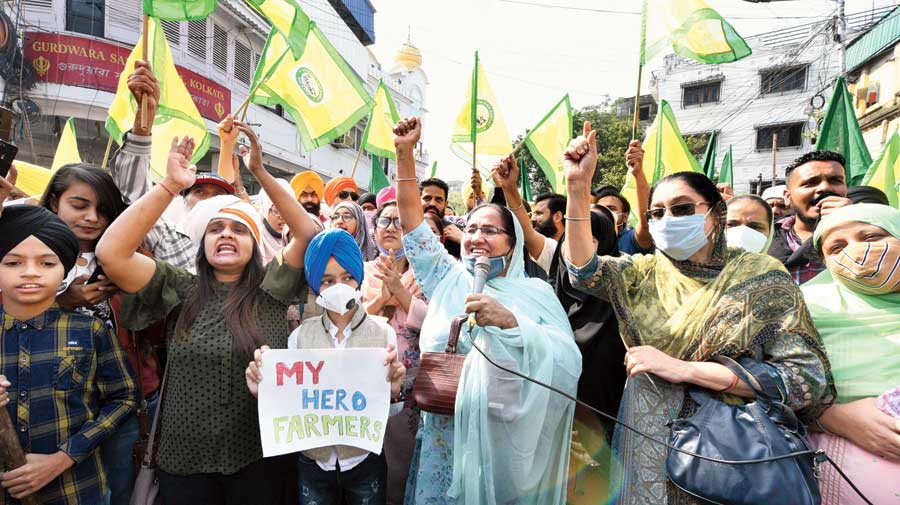 About 500 Calcuttans with roots in Punjab joined a rally on Sunday morning to protest the treatment meted out by the Centre and the Haryana government to farmers on their way to Delhi to voice grievances against the recently passed farm laws.

The protesters, who walked from Gurdwara Sant Kutiya on Harish Mukherjee Road to Colootolla, also demanded the Centre pass a law to prevent any attempt at abolishing the system of having minimum support prices for agricultural produce.

The organisers said the march was aimed at showing solidarity with the agitating farmers who had to brave jets from water cannons, tear gas and road blocks put up by the Haryana government and Delhi police on their way to the national capital.

The marchers in Calcutta wondered why farmers could not move freely in their own country to raise their voice against a law that hurt them.

Some of those who walked in Sunday’s rally said they had families back in Punjab who were still into farming. Some others left their land in the custody of other farmers and have settled in the city.

“There is a fear among farmers that the minimum support price (MSP) system will be done away with. It guarantees the farmers a minimum price for their produce. If a farmer does not get a good price in the market, he can sell it to the government at the MSP,” said Ajit Singh, one of those who joined the rally on Sunday.

“But the farm laws passed earlier this year do not talk about MSP. So there is a fear that the government does not want MSP any longer. This will ruin farmers, who will be at the mercy of private corporations that will directly buy from farmers,” said Singh, whose family has a 14-acre farmland in Ludhiana.

“We want the government to pass a law and guarantee farmers that the MSPs will stay,” said the Bhowanipore resident, who is also vice-president of the MG Road gurdwara.

Members of some other communities, too, joined the march, Singh said.

The demonstrators were angry at the way the BJP government in Haryana tried to prevent the agitating farmers from Punjab from reaching Delhi. Haryana chief minister Manohar Lal Khattar had announced on Tuesday that the state’s borders with Punjab would remain sealed on November 26 and 27.

“The Haryana government did not do the right thing. Why cannot farmers go to Delhi to voice their demands? If political parties can protest in Delhi, why not farmers?” asked Devinder Singh Benipal, a resident of Dunlop.

Benipal, who is also president of the Dunlop gurdwara, said his family had a 20-acre farmland in Ludhiana.

“The farmers were peaceful but the government and police used water cannons on them, fired tear gas shells at them. Is it proper to treat farmers like that?” asked Benipal.

The rally started at 11.45am. The protesters wanted to march till the BJP state headquarters but police stopped them on CR Avenue, outside the gate of the Calcutta Medical College and Hospital, around 1.45pm.

The marchers shouted slogans such as “Modi hai hai”, “Kala kanoon wapas lo” and “Kisan union zindabad” and also burnt an effigy of the Prime Minister on CR Avenue.