Mohammad Ali Karamulla, a Calcutta police constable, is also the man who has been shadowing Amartya Sen since 1998 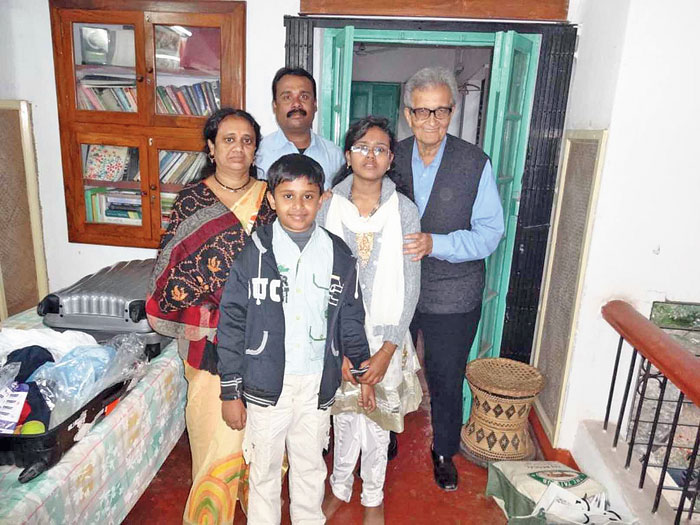 A police constable, who shadowed Nobel Prize winner Abhijit Vinayak Banerjee from the time he stepped into Calcutta to the moment he was hurried into the airport, was someone familiar with the madness around a Nobel laureate.

Mohammad Ali Karamulla, a constable of Calcutta police special branch, is also the man who has been shadowing Amartya Sen since 1998.

Banerjee himself was surprised by the association.

At Nabanita Dev Sen’s home, the veteran author called him Ali-bhai and invited him inside to save him from the crush of people near the door.

Ali was not new to Dev Sen’s residence. He had accompanied Amartya Sen and sometimes his own family a number of times to Bhalo-basa, the author’s home.

The Sens and Ali’s family share a bond that had strengthened over the years. Ali told Metro that Sen’s eldest daughter Antara was his daughter Shabnoor Khatoon’s inspiration and guide in life.

Ali, who has been accompanying Sen during all his visits to Calcutta, hails from Birbhum district and is known as the only cop whom the Nobel laureate allows to hold his hand luggage that contains his passport and visa.

A retired IPS officer said it was for his sensitive nature that Ali ends up becoming favourite for many.

The officer, who was posted in the then special security unit, recalled how Sen had refused to step out of the airport till Ali went to receive him.

“When Sen asked where was Ali, we rushed Ali to the airport from the Lord Sinha Road office (of security directorate) in a hooter-fitted car. By the time he reached, Sen had already waited for over 40 minutes. Sen calmed down only at the sight of Ali who immediately took his (Sen’s) hand luggage and started escorting him,” the officer, now retired, recalled.

A decade later, when he was accompanying another Nobel laureate, this time to see him off at the airport, Ali had his moments with Banerjee too.

Ali described Banerjee as a “man of few words.”

“Abhijit Sir would not speak much. I used to read his facial expression when he looked disturbed,” Ali said.

Ali said he contributed with a nod of approval to the gifts Banerjee had purchased from FabIndia.

“The moment he stepped inside the shop, all the employees rushed towards him. He did not utter a single word but I could make out from his expression. I asked all of them to go back to their respective departments. Only then, he could relax and shop,” Ali said.

What similarity did he find in the two Nobel laureates?

“Every time Prof. Sen would board his vehicle while returning from any event, he would always ask if the security personnel had had their food. He would always tell me to feed them and would pay the bill,” Ali said.

With “Abhijit Sir”, he got only a day. “From the way he behaved with me and lamented that security personnel were having a tough time because of him, it was clear he too has a big heart,” Ali said.

Ali and his colleagues, who had to create a human chain to let Banerjee alight and board his vehicle on the his way to the airport, has only one regret. He could not say “Goodbye” to him.

“I am sure he would have turned back and bid me goodbye had there not been so much crowd. But there was no scope. Sir has said, he would inform me when he comes in January,” Ali smiled.